The Czech Republic ranks first in the world in the incidence of colorectal cancer. Despite screening programs, there are still a large number of patients who have distant, especially hepatic, metastases.

In most other malignancies (breast tumors, bronchogenic carcinoma), liver metastases are a sign of a highly advanced finding that is no longer resolved by any radical (curative) resection, but this does not apply to colorectal carcinoma. In fact , curative resections of cancer can be performed in 10-20% of colorectal cancer patients who have liver metastases[1]. Therefore, their treatment should receive increased attention. The result is 40% five-year patient survival[1][2].

According to the time of occurrence, we distinguish metastases:

In the case of synchronous metastases, resection at the same time together with tumor and lymphadenectomy is recommended.

The following are important for the treatment procedure: 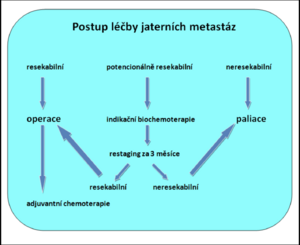 Patients with potentially resectable metastases first undergo indicative biochemotherapy, after 3 months of restaging, when a final decision is made as to whether they are resectable or not.

The only possible procedure is palliative chemoradiotherapy.

The response of liver metastases to chemotherapy is quite high, in 50–60% of cases they regress or even disappear (4-7%) on CT examination. The disadvantage is the formation of vascular lesions after some preparations:

Bevacizumab may impair the liver's ability to regenerate.

Prior to liver resection, CT volume therapy must be performed to estimate the amount of liver tissue remaining. In general, at least 20% of the functional tissue must be maintained in otherwise healthy livers and up to 40% in affected livers (blue or yellow livers).

Anatomical resections include segmentectomy (the liver has 8 segments) and lobectomy. At present, they are not preferred because they are more radical performances.

NAR (non-anatomical resection) is a performance-saving parenchyma. Perioperative sonography is necessary to clarify the location of metastases during surgery. Previously, a 1-2 cm border of healthy parenchyma around the resected metastasis was required. This is already being abandoned, less is enough.