The spleen (Greek. σπλήν, splen; latin. lien) belongs functionally to the vascular system as an organ where worn-out erythrocytes are taken up and destroyed and lymphocytes are formed in the lymph nodes. At the same time, the spleen is the largest lymphatic organ and the main point of defense against pollutants and infections entering the circulation. Other functions of the spleen include the production of antibodies and immunocompetent cells, also the function of the blood reserve tank (which is expelled from the spleen by the contraction of myofibroblasts with increased oxygen consumption, for example during prolonged muscle activity, etc.). Spleen cells have a phagocytic capacity. During development, the site of the hepatolienal period is hematopoiesis. 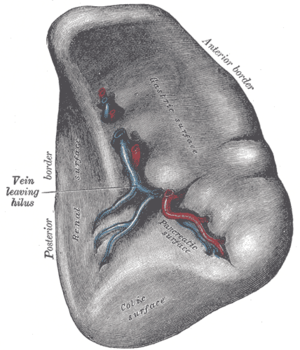 Visceral side of the spleen

The spleen is an oval-shaped organ placed obliquely from back to front and down in the left diaphragmatic vault (pars supramesocolica , or saccus lienalis), according to which it is curved. Its longitudinal axis follows the 10th rib / intercostal space, the entire width of the spleen affects the area from the 9th to the 11th rib. It is burgundy to violet-red on the living, bluish on the dead. Its surface is smooth, shiny, covered with visceral peritoneum. Size varies individually: length 10 - 13 cm, width 6 - 8 cm, thickness 4 cm; the weight also varies, which also depends on the degree of blood filling: 140-160 g male; 120-150 g female (weight 200 g not yet pathological). At rest, the size is greater, the weight changes with age - after the age of 40, the weight decreases. Pathologically, the spleen may enlarge in some blood disorders (splenomegaly). The surface is very brittle, it tears easily during blunt impacts on the abdominal wall, which leads to heavy bleeding.

On the surface you can recognize:

The whole organ is fixed by curtains:

Topographic surroundings of the spleen

The envelope of the spleen consists of two layers - the superficial tunica serosa formed by the superficial visceral peritoneum, which merges with the deeper tunica fibrosa (capsula lienis), ie the fibrous sheath under the peritoneal coating. The ligament sheath contains elastic fibers and smooth muscle cells. Trabeculae lienis, dense fibrous beams that protrude from the spongy stroma and lead to the interior of the spleen vessel, protrude from the fibrous sheath. The spleen stroma as a peripheral lymphatic organ consists of collagen and reticular ligament with interspersed smooth muscle cells. The spaces between the trabeculae are filled with the red and white pulp of the spleen. White pulp is formed by nodules of lymphatic tissue macroscopically visible as grayish-white dots. Red pulp is formed by a reticulum interwoven with blood vessels and their dilated sections (spleen sinuses); between the trabeculae they run like the so-called Cords of Billroth.

The a. lienalis enters the hilum of the spleen with 4-6 branches into individual segments of the spleen, which further branch and run in the beams of the spleen as aa. trabecular. Branches protrude from the beams to the pulp - aa. centrales - with a diameter of 0.2 mm. From the exit of the beam, the arteries are accompanied by a layer of lymphatic tissue - periarterial lymphatic sheath (PALS). A. centralis is usually stored eccentrically in PALS. PALS is a thymodependent zone, so it is populated by T-lymphocytes. In addition, some PALS are enveloped by lymph nodes (folliculi lymphatici lienales). These nodules, together with the marginal zone that surrounds them, form the so-called peripheral white pulp. After exiting the white pulp cluster, the artery branches into a red pulp like aa. penicillatae ('brush arteries') with a diameter of 25 μm. There is a short thickened section called, Schweigger-Seidel sheath, a reticular cell capsule , on each of the arteries of this brush. At this point, the artery has only an endothelium, the cells of the capsule represent the other layers of the vessel wall. Nerve endings occur at the site of the caps. The thin precapillary artery continues from the capsule, which opens into the sinus lienis, splenic sinuses, extended sections of the riverbed (diameter 80−150 μm). The sinuses densely intertwine the red pulp, the endothelial cells of their walls are long, narrow, longitudinally arranged. The transverse strips of discontinuous lamina basalis and reticular fibers condition the typical appearance of a sinus-like barrel with hoops. The endothelial cells of the sinuses divide according to the degree of dilation of the sinus, creating fissures (2–3 μm) allowing the passage of blood fluid and blood cells into the red pulp and back into the sinus. This mechanism occurs in the body only here and in the placenta. The beginnings of thin walled postcapillary veins emerge from sinuses, which turn into medullary veins. These lead the red pulp to the tracheal spleen; they collect into veins in the beams of the spleen, trabecular veins. The wall of the trabecular veins consists only of the endothelial lining, the other layers are replaced by the ligament of the beams. Trabecular veins collect in hilar veins, that connect within the ligaments. pancreaticolienale in the v. lienalis: behind the upper edge of the body of the pancreas. V. lienalis enters the v. Portae.

The white pulp makes up 20% of the internal volume of the organ. It is bound to the course of blood vessels - after branching of the a. Lienalis in aa. trabeculares and then aa. centrales, the central arteries are enveloped by a thymodependent periarterial lymphatic sheath (PALS). PALS as thymodependent regions contain T-lymphocytes. Malpighian bodies can form around these sheaths - lymph nodes containing B-lymphocytes, which as standard lymph nodes are divided into primary (without antigen stimulation) and secondary (with germinal centers created by antigen stimulation). There is a marginal zone with B-lymphocytes, macrophages and dendritic antigen presenting cells at the white and red pulp interfaces. The marginal zone plays an important role in the development of the immune response to antigens in the blood - dendritic cells take up antigens from the blood and pass them on to immunocompetent nodular cells. These are activated and form the germinal center of the nodule. Activated B-lymphocytes and plasma cells pass into the red pulp. The plasma cells in the red pulp remain and deliver their antibodies to the sinus blood; activated B-lymphocytes leave the red pulp and enter the bloodstream.

The red pulp is formed by a reticular ligament arranged in the marrow cord (cords of Billroth ) interwoven with sinuses. Fixed and free macrophages, monocytes, lymphocytes, plasma cells and blood elements (erythrocytes, granulocytes, platelets) occur in the reticulum mesh. Erythrocytes penetrate the sinuses - viable erythrocytes return to the sinus and circulate through the veins, surviving erythrocytes are retained in the pulp, destroyed and phagocytosed. The principle of retention is based on the fact that aged erythrocytes have a thinned cell membrane - by pressure from inside the cell they arch into spherical shape (spherocytes), which prevents them from passing back to the sinuses. Macrophages are programmed to capture spherocyte-sized spherical structures.

Function of the spleen[edit | edit source]

Lymphocyte formation takes place in the white pulp, lymphocytes then pass into the red pulp and then through the sinuses into the bloodstream. In the marginal zones, lymphocytes are taken up from the circulation and incorporated into the white pulp. The production of erythrocytes and granulocytes disappears with the end of the fetal period, but it reappears in adulthood, for example in [[leukemie|leukemias].

Antigens are taken up from the blood by macrophages, the surface of the reticular cells of the lymph nodes and their marginal zones. Some of these cells to enlarge the surface branched (dendritic). B-cells are activated by antigens, which proliferate and turn into immunoblasts, which turn into antibody-producing plasma cells. After the reaction subsides, some B-lymphocytes that have not reached the plasma cell stage remain as memory cells. Upon subsequent encounter with the same antigen, these cells allow for a rapid immune response and prompt antibody production. Macrophages actively phagocytose bacteria and viruses, but also lipid droplets, thereby filtering the spleen and cleansing the circulating blood. T-lymphocytes from the periarterial lymphatic sheaths proliferate, pass into the bloodstream, where they play a role in the so-called cellular immunity.

The lifespan of erythrocytes is 120 days, their destruction takes place in the red pulp. Here, erythrocytes are retained, surrounded by macrophage protrusions, fragmented, phagocytosed, and lysed into lysosomes. Hemoglobin of destroyed blood cells is converted to bilirubin and ferritin. The bilirubin thus obtained is utilized in the liver as a bile pigment, and iron from ferritin is used in the bone marrow to form new erythrocytes.

The blood retained in the spleen can be passed into the bloodstream to increase the volume of circulating blood, for example during prolonged strenuous muscle work. The smooth muscle in the sheath and trabeculae is not enough to expel the blood, so the muscles of the spleen vessels are also necessary. The volume added to the bloodstream is not significant.

Examination of the spleen[edit | edit source] 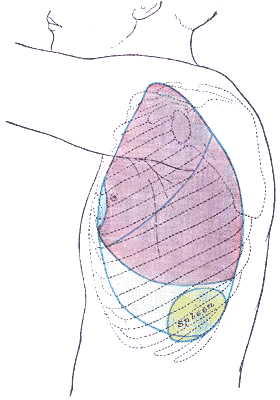 Placement of the spleen, we feel the pathologically enlarged spleen during the X. rib (so-called spleen rib)

Development and variation of the spleen[edit | edit source]

The spleen arises as a bumpy thickening on the left side of the posterior mesogastrium in embryos 8 - 10 mm long. The superficial coelom epithelium is initially cubic, with a mesenchyme below the epithelium . With the growth and rotation of the arch to the left - enlargement is irregular, faster enlargement takes place in the districts around the vessels. The growing base has the character of low protrusions that merge quickly. In the 3rd month of development it reaches its final form, the mesenchyme of the interior of the base differentiates into the capsule and trabeculae and the next red pulp. Typical sinuses appear in the 6th month of development, hematopoiesis lasts until the 8th month of development.

They leave the larger beams along the vessels and the capsula lienis. Blind lymph capillaries begin in the white pulp, from where they lead to the trabeculae, from there to the capsule lienis, then to the hilum and then to the nodi lymphatici pancreaticolienales (group of nodes in the cauda pancreatis).