Sialadenitis (sialoadenitis) is an inflammation of salivary glands (usually the major ones - the most common being the parotid gland, followed by submandibular and sublingual glands). It should not be confused with sialadenosis (sialosis) which is a non-inflammatory enlargement of the major salivary glands.

It may be acute or chronic, another classification divides different types of sialadenitis according to the origin (actual cause of the condition):

Autoimmunne sialadenitis may also be one of the symptoms of Sjörgen's syndrome as it comprises numerous conditions. In the presence of a susceptible genetic background, both environmental and hormonal factors are thought capable of triggering the infiltration of lymphocytes, specifically CD4+ T cells, B cells, and plasma cells, causing glandular dysfunction in the salivary and lacrimal glands. A lip/salivary gland biopsy takes a tissue sample that can reveal lymphocytes clustered around salivary glands, and damage to these glands from inflammation.

Generally, in acute bacterial and viral sialadenitis cases, the lobular architecture of the gland is maintained or may be slightly expanded. Areas of liquefaction, indicating the presence of an abscess, may also be seen microscopically. In Viral sialadenitis, vacuolar changes are seen in the acini with lymphocytic and monocytic infiltrate found in the interstitium. 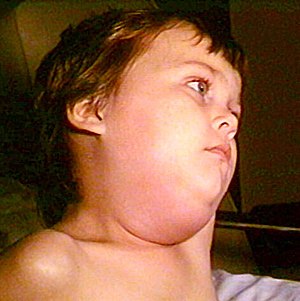 Mumps in a child
Mumps

A unilateral or bilateral painful swelling of the parotid or submandibular regions may be present upon a physical examination. This could be accompanied by an external displacement of the earlobe usually adjacent to an inflamed parotid gland. Pus suppuration from major salivary gland duct openings may occur spontaneously or after manipulation of the affected gland. Mandibular trismus is a rare finding but may be present with larger swellings. Dysphagia may also be present in some cases. 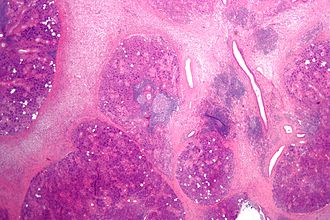 Chronic sclerosing sialadenitis is a chronic (long-lasting) inflammatory condition affecting the salivary gland. Relatively rare in occurrence, this condition is benign, but presents as hard, indurated and enlarged masses that are clinically indistinguishable from salivary gland neoplasms or tumors. It is now regarded as a manifestation of IgG4-related disease. Involvement of the submandibular glands is also known as Küttner's tumor

Chronic recurrent parotitis (CRP) is a nonspecific sialadenitis that is characterized by unilateral or bilateral preauricular swellings with either periodical episodes of swellings and remissions or persistent swelling of the involved gland.

The occurrence of chronic recurrent episodes may be due to underlying Sjogren's syndrome or ductal abnormalities. Prodrome of tingling in the gland preceding pain and swelling may be reported in such cases.

Radioactive Iodine-Induced Sialadenitis is swelling of a salivary gland as a result of high radiation doses from cancer treatment, which causes inflammatory salivary gland disease.

The salivary  glands often lie directly  in the path or at the fringes of the irradiation field during  radiotherapy  of tumors in the head and neck region. As a result, changes may occur whose clinical and morphological picture may  be summed up by  the term radiation-induced  sialadenitis