Rheumatoid arthritis is an autoimmune inflammation that is often associated with the HLA-DR 4 or DR 1 immunophenotype. The initiator is thought to be a currently unknown microbial pathogen (EBV, retroviruses, parvoviruses, borrelia, etc. are being considered). It is not exactly known against which antigen the autoimmune reaction is directed - probably against type II collagen or against cartilage glycoprotein 39 (it binds to DR 4). Rheumatoid factor, the antibodies against the Fc fragment of IgG, occurs in 80% of patients.

The first changes are in the synovium, then in the fluid, later on the cartilage and finally para-articular involvement. First, serofibrinous intra-articular inflammation occurs, then a panus develops. The panus is a villi-swollen synovial membrane in which connective tissue and blood vessels proliferate excessively. It covers the articular cartilage, separating it from the nourishing synovial fluid. As a result, the chondrocytes die and the subchondral bone mass erodes. If the panus growing from opposite sides of the joint fuse, it can further change fibrotic, ossify, and eventually ankylosis.

Another morphological manifestation of rheumatoid arthritis are rheumatic nodules, which occur mainly in the subcutaneous tissue. Histologically, they consist of three layers: 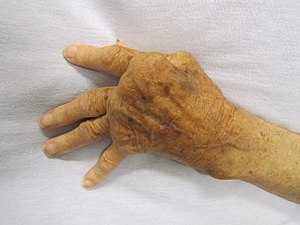 Initially, involvement of the joints of the hand starts from the periphery.

The joints are painful at rest, during palpation and movement, morning stiffness occurs (agitation lasts longer than an hour). There are classic signs of inflammation on the joints, except for redness. In more severe cases, chronic inflammation can lead to volar subluxation of the wrists and rupture of the finger tendons. The activity of the process is fluctuating, often depending on the humidity.

Affected mainly in the neck, the atlantoaxial joint is severely affected by subluxation (neck and head pain, spinal cord compression). Sudden death can be a complication of subluxation. An X-ray should be performed prior to each intubation operation if atlantoaxial subluxation is suspected.

The course of the disease[edit | edit source]

There are 3 types of the course of the disease:

The disease may be accompanied by extra-articular disorders:

rheumatic nodules (in the subcutaneous tissue, especially above the elbows and above the proximal edge of the ulna), mostly multiple, usually painful nodules, up to several cm in size;

Four Steinbrocker stages were introduced for the evaluation of X-rays.

Stadium I periarticular osteoporosis, no destruction

Furthermore, scintigraphy can be used in diagnosis (it will show the distribution of disability in individual joints).

The presence of 4 of 7 criteria is important for the diagnosis of rheumatoid arthritis:

Maintaining the range of motion in the joint, preventing muscle weakness.

I belong to two groups of drugs: