Amyloidosis (amyloid dystrophy) is a designation for the main symptom of a group of diseases caused by amyloid deposition in many organs. Amyloid is an insoluble degradation product of some proteins, its name being derived from the fact that it behaves similarly to starch when stained with Lugol's solution . Amyloid deposits can impair organ function to such an extent that renal failure , malabsorption syndrome or dementia are clinically manifested.. The immediate cause of deposition may be pathological conditions, usually chronic inflammatory disease, but there are also inherited forms of the disease in which some mutant proteins show a higher susceptibility to amyloid deposition. The molecular basis of the properties of amyloid is the precipitation of fragments rich in the secondary structure of β sheet and their folding into characteristic unbranched fibrils.

Macroscopically, amyloid is usually yellowish-gray-white, semi-translucent, the consistency is usually brittle to brittle, but it can also be relatively flexible. Amyloid-infiltrated organs tend to be stiffer, sometimes more flexible, and are then dullly shiny on the incision in a way that reminded old pathologists of bacon. In conventional hematoxylin and eosin staining, amyloid is amorphous and turns pinkish red. When viewed with an electron microscope, amyloid has a fibrillar structure, consisting of unbranched fibrils usually 8–10 nm in diameter (according to some sources 6–12 nm), which form a relatively dense felt-like structure.

Detection of amyloid in a macroscopic tissue sample.

Amyloid is formed by fibrils formed mainly by the starting protein. Dozens of proteins that may give rise to amyloid have been described. Fibril formation is a spontaneous process controlled by the physicochemical properties of the precursor protein. The formation of fibrils is similar to crystallization, fibrils are best formed on the basis of existing nuclei, ie clusters of pathological precursor proteins. The dynamics of the amyloid formation process is influenced by the concentration of nuclei, on which amyloid fibrils can form more rapidly. In terms of process dynamics, three phases of amyloid formation can be distinguished:

Although at least 27 different precursor proteins have been described in human pathology, the appearance and formation of fibrils are relatively uniform. Fibrils form protofilaments with a diameter of 25 nm from protein residues rich in β-sheet structure. Protofibrils have a diameter of 25 nm and can twist around or adhere to each other laterally. In principle, five possible mechanisms can be identified that can lead to amyloid formation:

The process of amyloid fibril formation is still poorly studied because detailed analysis of the structure of amyloid is very difficult. It has been shown that a number of proteins, under specific in vitro conditions , can assume a non-physiological misfolding that leads to aggregation; however, only a few proteins assume such a conformation even under in vivo conditions .

Proteins that can give rise to amyloid are a heterogeneous group of proteins of various functions and structures. A common feature of these proteins is the high proportion of β-leaf, α-helix and β-helix secondary structures, although only β structures are detectable in amyloid. During the formation of amyloid, the original protein fragments, physiologically, complete degradation is common at this stage. 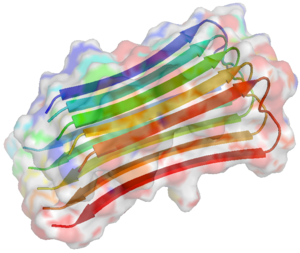 Analysis of the X-ray diffraction pattern of amyloid led to the finding in the late 1960s that amyloid is rich in β structures, a similar pattern was obtained from amyloid formed from various precursor proteins. From a biochemical point of view, amyloid is a non-covalently bound polymer whose monomeric units are β-sheet rich peptides. The result of protein misfolding is a high proportion of β-sheet in their secondary structure. Under certain circumstances, β-sheets interact with a relatively strong bond, not only within a single molecule, but also between molecules. The bond between the individual molecules gives rise to the so-called cross-β structure. It is important for other properties of amyloid that the resulting structures are relatively hydrophobic. This is most likely responsible for the high stability of amyloid in vivo, probably including the fact that amyloid practically does not stimulate the inflammatory response. The interaction between several β-sheets leads to the formation of protofibrils, along the long axis of which the β-sheets of the individual peptides are oriented longitudinally. The protofibrils are again side-by-side, but as a result they are folded so that they are rotated at the same time. In the amyloid fibril, the protofibrils are then placed perpendicular to the long axis of the fibril, but are not in a row. Interestingly, amyloid fibrils are not uniform.

Amyloid deposits are not only amyloid fibrils, they also contain a number of other more or less tightly bound substances, so-called coprecipitated components:

From the point of view of tissue biology, amyloid is not just a passive substance. Although it does not cause a cleaning reaction, it is toxic to adjacent cells. It was originally thought that amyloid was primarily the physical barrier that significantly affected the exchange of substances necessary for cell metabolism. This effect could be potentiated by the macrophages present. However, it was later shown that the soluble amyloid precursor components are at least as toxic, i.e. that the toxic effects of amyloid are much more complex. For example, soluble amyloid fragments of light chain origin added in the experiment induce cardiomyocyte apoptosis in tissue culture.

According to the nature of the disorder, amyloidosis can be divided into localized and systemic. Localized amyloidosis is characterized by the fact that amyloid occurs in only one organ, it does not spread further. These include, for example, Aβ amyloid deposits in Alzheimer's disease or, for example, islets of Langerhans in long-term diabetes. Systemic amyloidosis is characterized by the simultaneous involvement of several systems. For historical reasons, two forms of amyloidosis have been distinguished: primary and secondary. In the case of the primary, the cause was not obvious, in the case of the secondary it is a reaction to a chronic inflammatory disease. These two groups also differ in the spectrum of disabilities and therefore these terms continue to be used, albeit in a somewhat shifted sense (see below).

Molecular classification is based on the determination of an amyloid-forming protein. It is usually an acquired disease, but there are also hereditary forms. The following table summarizes the most common types:

Amyloid is made up of fragments of light chains (lambda chain) of immunoglobulins. It practically corresponds to primary amyloidosis in the pathological classification, therefore the names AL amyloidosis and primary amyloidosis are usually used interchangeably. It is the most common form of systemic amyloidosis, the incidence in Western countries is about 1 / 100,000 cases per year. It usually occurs in patients over 45 years of age, with a maximum incidence of around 67 years of age. According to published results, the median survival is between 10 and 42 months.

The actual cause is the monoclonal proliferation of plasma cells with overproduction of light chains. Current therapy is primarily aimed at suppressing monoclonal proliferation, but this therapy is not curative in the sense that suppression of light chain overproduction usually does not lead to regression of the disease. Amyloid deposits can occur virtually anywhere in the body, most often affecting the blood vessels, kidneys, peripheral nerves and digestive tract, the prognosis is significantly worsened by heart disease. The first manifestation is usually kidney damage.

The clonal expansion of plasma cells described above is usually not accompanied by clinically manifest multiple myeloma , usually less than 10% of myeloma cells in the bone marrow . The reason for the overproduction of light chains is that light and heavy chains are also produced independently in non-tumor cells, but in a balanced ratio. In tumor cells, this ratio can be disrupted, usually in favor of light chains, which can be synthesized three to four times as much as heavy chains. This results in free light chains in an amount sufficient to form and grow amyloid deposits.

Chemotherapy is used in the therapy according to experience with the treatment of multiple myeloma. Experience with autologous stem cell transplantation is contradictory because the procedure itself is burdened by high mortality.

At the time of diagnosis, secondary amyloidosis usually (up to 95% of cases) manifests as proteinuria or renal failure with varying rates of progression.

The level of SAA as an indicator of ongoing inflammation is a very good prognostic factor with a direct link to the biology of the disease. When SAA levels are reduced by treatment of the underlying disease below 5 mg / l, regression of all organs except the kidneys is relatively common. Renal impairment is usually irreversible and therefore preservation of function and non-deterioration can be expected at most.

Amyloidosis of chronically dialysis patients (β 2 M amyloidosis) is a serious complication of chronic hemodialysis . Fibrils are formed from β 2 microglobulin , part of HLA . β 2 microglobulin may accumulate because its degradation occurs in a relatively unusual manner. The protein normally crosses the glomerular membrane into the primary urine and is resorbed and degraded in the proximal renal tubules. If ESRD (End Stage Renal Disease) develops, the protein accumulates and the level from physiological values ​​of 1-2 mg / l may rise to 50-70 mg / l.

The development of the disease is gradual, usually occurring 10 years after the start of dialysis. β 2 M amyloid is deposited mainly in the musculoskeletal system, usually manifesting as carpal tunnel syndrome , arthralgia, spondylarthropathy, subchondral bone cysts and pathological fractures.

The diagnosis is complicated by a clinically highly heterogeneous picture of the disease, so the diagnosis is usually made relatively late, and it is not uncommon for amyloidosis to be an unexpected finding on histopathological examination.

Samples for examination are obtained from biopsies of the tongue, skin, rectal, buccal mucosa and kidneys. For histopathological diagnosis, Congo red staining and birefringence detection are the gold standards , and immunohistochemical examination plays a role in determining the type of fibrils. Immunochemical examination to determine the type of amyloid is complicated on the one hand by the possible loss of antigenicity of amyloid and on the other hand by non-specific binding of antibodies. We immunofluorescently detect anti-AA, anti-λ and anti-protilátky antibodies. Free chain determination (FLC) is important for determining the prognosis of the disease. We also examine the bone marrow, where we find an increased percentage of plasma cells and atypical lymphocytes.

A specific technique for detecting amyloid deposits in a patient's body is scintigraphic examination using a radiolabeled SAP protein , usually 123 I-SAP. SAP binds reversibly to all known types of amyloid, equilibrium is reached very quickly. The method is not suitable for the examination of small or mobile structures, so it is not suitable for the assessment of heart and nerve damage.

Biochemical indicators serve primarily as a marker of the severity of the involvement of individual organs. In the case of primary amyloidoses, monoclonal production of the pathological protein can be demonstrated in serum and usually in urine. Proteinuria with a high concentration of Bence-Jones protein is typical for amyloidosis.

It is estimated that 5–10% of all systemic amyloidoses occur on an inherited basis, so it is appropriate to supplement genetic testing.