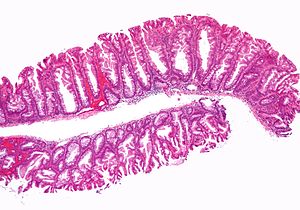 Sesil serrated adenoma, H&E. The arrangement of the epithelium in the wall of the crypt resembles saw teeth, could incur group name lesions (eng. serration = perforation).

Serrated lesions (sawtooth lesions, sawtooth adenomas, serrated adenomas) are a group of colon adenomas, which probably result in at least a third of all colorectal cancers (data in the literature vary). Serrated lesions were first described by Longacer and Fenoglio-Preiser in 1990 as the result of an analysis of a group of colorectal polyps with mixed hyperplastic polyp and adenoma properties. Serrated lesions have several subtypes that differ in the risk of developing malignancy. The serrated lesion owes its name to the fact that the epithelium of the crypt resembles a saw blade in its arrangement, more precisely the prominent epithelial cells resemble saw teeth. This characteristic arrangement is mainly due to a disorder of apoptosis. According to histological morphology, serrated lesions are classified according to WHO (2010) as follows:

1The terms adenoma and polyp are used, at least in English-written texts, as synonyms.

The molecular mechanism of serrated lesions and possible malignancy is different from the traditional adenoma-carcinoma pathway, which involves a mutation in the APC gene, as well as from the direct mutation in mutator genes, that causes Lynch syndrome. There is talk of a serrated pathway leading to cancer with a hypermethylation phenotype. Mutations in KRAS or BRAF (protein kinases involved in the MAPK signaling pathway) appear to be a key step in the serrated pathway, followed by variously expressed hypermethylation of CpG islands in the regulatory regions of mutator genes, resulting in the so-called CIMP phenotype (CpG Island Methylated Phenotype). This results in a decrease in the expression of repair proteins and the cell becomes more susceptible to further somatic mutations. The exact sequence of mutations and disorders during the serrated pathway is not known; it is possible, that these several pathways are partially linked. The following phenotypes of colorectal cancers are usually distinguished, initiated by serial lesions:

Although these are actually two pathways, one of which branches further, there is talk of a serrated pathway of colorectal cancer to express its difference from the pathway of carcinoma in the conventional adenoma-carcinoma sequence and from the development of tumors in Lynch syndrome. 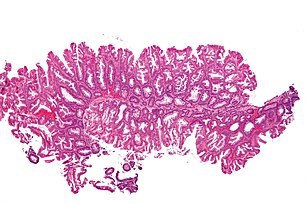 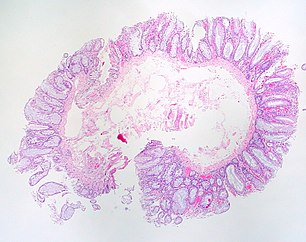 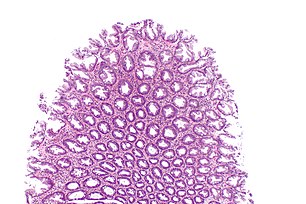