Peutz-Jeghers syndrome is an inherited disease that belongs to hereditary tumor syndromes. It was named after the American internist "Harold Joseph Jeghers" and the Dutch internist Johann Laurent Augustin Peutz.

It is an autosomal dominant disease. It is most often caused by a mutation in the serine / threonine kinase gene STK11 on the short arm of chromosome 19.

Typical symptoms are numerous melanin pigmentations in the mouth, lip red and oral mucosa. Similar spots appear on the fingertips, eyelids and nasal wings. The syndrome is further characterized by numerous polyps in the large intestine, which predisposes such patients to a higher incidence of colorectal cancer. Complications can also be ileus or repeated gastrointestinal bleeding. 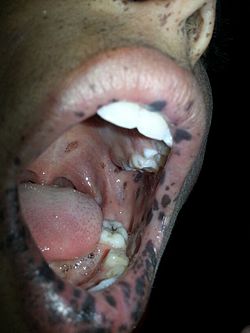