Various laboratory vessels and devices are used for preparation of solutions and manipulation with liquids. They differ in the intended use and accuracy. Precise volumes must always be measured at constant temperature because, due to thermal expansion, changes in temperature are followed by changes in volume. For example water at 10 °C has much smaller volume than at 80 °C.

* not suitable for measuring volumes, only approximate volume indicated

Beakers are used for approximate determination of the volume of liquids and thus are not necessarily classified as measuring tools. They are used especially for dissolving compounds, diluting liquids, heating and other operations. Beakers are unique for there 'beak' that is used to pour liquids. Because of low accuracy, they are frequently not classified as volumetric devices.

Volumetric cylinders and volumetric flasks are used to measure volume of liquids contained in them. They are calibrated for volume included in them - this is indicated by the marking "IN". The liquid has accurate volume when it reaches the corresponding marking on the scale. Volume is usually indicated in mL. During measurement of the volume the vessel must be placed on an even, horizontal support. The required volume is measured when the lower edge of meniscus of the liquid just touches the marking on the vessel. Cylinders are less accurate, volumetric flasks are used for preparation of solutions of exact concentration. Cylinders are used solely for measuring volume, they are not employed for dissolution, dilution or mixing.

Burettes, pipettes, dispensers and syringes measure volume of a liquid delivered to another vessel.

Pipettes and burettes are usually calibrated for outpouring. It is indicated by letters "EX" (from exclude). The exact volume is measured when the liquid is kept to flow out from a certain marking on the scale. Some liquid may remain in a pipette after outpouring; it should never ever ever be blown out, its volume was taken ito account during calibration.

Burettes are used for titrations or whenever the same liquid is repetitively measured. Burette is a glass or plastic tube with calibrated scale closed with a stopcock. Burette is attached to a stand in a vertical position. With a closed vent, it is filled with the measured liquid. Some liquid is then outpoured so that the meniscus touches marking of the scale. Now, burette is ready for titration. The liquid is outpoured with the stopcock and the volume is read on the scale. The most important moment is reading the volume; with burette, the volume is always read twice: first to read the starting position of the meniscus and the second time to read the end position. As the difference in volume is calculated, it is not important how exactly the volume is read, it must however be read in the same way every time.

Today, glass pipettes are rarely used in contemporary routine laboratories; glass pipettes were replaced by semiautomatic dispensers. The volume of glass pipettes may vary from 1 to 100 mL. Glass pipettes can be non-scaled for measuring of a certain volume or scaled with grades by 1 mL and tenth of milliliter. Numbering of the scale can go from the tip up or in the opposite direction.

For security reasons, a liquid should never be aspired by mouth. Various adapters and pistons are used instead. 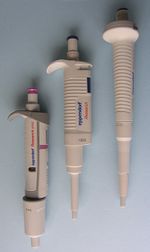 Another possibility of measuring small volumes is use of micropipettors. They are always calibrated for outpouring.

Microsyringes serve for dispensing small volumes (0.1–1000 μL) of liquids. They consist of a needle attached to a scaled glass cylinder with a piston. Different types vary in the diameter of needles and pistons.

Piston dispensers consist of a piston with a scale attached to a flask. They are intended for repetitive dispensing of the same volume from the stock container. Dispensers designated for measuring aggressive liquids (e.g. strong acids) are made of borosilicate glass; plastic parts that are in contact with measured liquid are made of PTFE, the other parts of PE or PP. Electronic control modules may automate dispensing in contemporary dispensers. 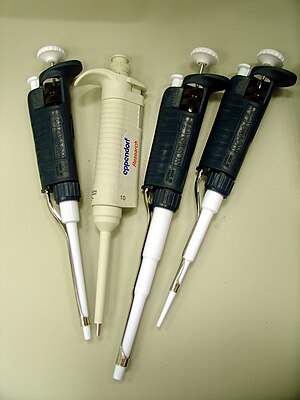 According to the way of operation, manual and electronic pipettors can be distinguished. In manual pipettors, the piston is moved by a thumb using an operation knob. Accuracy and precision of pipetting depend on expertise of the operator. In case of electronic pipettors, the piston is moved by a small electric motor. Different speeds of aspiring and expressing of the liquid can be selected according to properties of the pipetted solution.

According to the principle of operation, pipettors can be divided into two big groups:

Principle of so called air cushion is employed in this type of pipettes. A certain volume of air is between the piston and measured liquid. The volume of solution and of the air aspired or expressed with the piston may differ. It depends on density and viscosity of the liquid, wettability of the surface of the tip with pipetted liquid, temperature, athmospheric pressure and other influences. Thus, every pipettor must be calibrated on a regular base.

Air displacement pipettors can be designed as a single channel (for pipetting of a single volume at a time) or as a multi channel (most frequently with eight or twelve channels). Multi-channel pipettors are intended for simultaneous pipetting of the same volume of liquid to several wells of a microtitration plate. Every channel has its own piston; therefore, it is not necessary to use all 8 or 12 channels (i.e. less tips can be attached to the pipette).

Micropipettors are constructed for one fixed volume or it is possible to set the volume. Volumes can be set discretely (changing of plug-in modules) or continuously in a certain range (e.g. 10–100 μL) using an adjustable screw or knob. At the lower end of a micropipette there is a removable tip. At the other end, there is the knob operating the piston inserted into the cylinder of the pipettor.

Liquid is aspired into the tip without any air cushion – the piston is in contact with measured liquid. The liquid is then delivered at once or in several steps (in case of so called "steppers"). This type of pipettors is suitable for very viscous or voilatile liquids and for repetitive pipetting.

Forward pipetting This is the most frequently used technique. In forward pipetting, an exactly set volume of liquid is aspired to the tip and then it is delivered to a new vessel. This technique is recommended for pipetting of diluted aqueous solutions, bufers, diluted acids and bases.

Forward pipetting brings a small error in the delivered volume as a thin film of pipetted solution remains on the inner walls of the tip. In other words, according to the described procedure a slightly smaller volume than required is delivered. This error depends on properties of measured liquid and of the tip. The error can be avoided if the inner wall of the tip is pre-rinsed with the measured liquid. Practically, liquid is first aspired to the tip. Then it is not delivered to a new vessel but returned back to the stock vessel. Now, a very thin film of pipetted liquid covers the inner wall of the tip (it is usually invisible). Pipetting according to instructions given above follows (without changing the tip). As the volume of liquid remaining in the tip is practically constant, exactly the set volume is measured.

Reverse technique In reverse technique, a larger volume of solution is aspired to the tip. Then, an exaxt volume is delivered (and some liquid remains in the tip). This technique is suitable for very viscous or volatile liquids, biologic fluids, foaming solutions and for measuring very small volumes.

This technique is used when the same volume of the same liquid is to be measured to several test-tubes or to many wells of a microtitration plate. It is similar to reverse pipetting where steps 2 to 4 are repeated several times.