Centrifugation can be used to remove solid particles from a suspension in the most simple application. Removal of blood clot or blood elements from the whole blood can serve as an example. Centrifugation is also useful for separation of a mixture of non-miscible liquids. At high speeds that can be reached in high-speed centrifuges and ultra-centrifuges, even individual fractions of cells from a cell homogenate can be isolated. It is also possible to separate macromolecules in a mixture.

Suppose that the same mixture is split into two test-tubes. One test-tube is placed into a rack and the mixture in it is left to freely sediment. The other tube is centrifuged at 10 000× g. It means that particles in the centrifuged tube re influenced by ten thousand times bigger acceleration compared to the freely standing tube.

It can be easily derived that the relative centrifugal force depends on the radius of the rotor and on the number of revolutions per minute:

where R is the relative centrifugation force, n is the number of revolutions per minute and r is the radius of the rotor in centimeters.

The speed of movement of the particles in the mixture is called sedimentation speed. In a simplified model, this speed depends on the relative centrifugal force and on the difference between densities of particles and the environment in which particles are dispersed. It is also influenced by the size of particles and by the viscosity of the mixture.

Literally, a statement that subunits of the ribosome are of a "size" 30 S and 50 S can be found. This piece of information describes their behavior during ultracentrifugation of cell fractions. More or less it means that if the subunit 30 S is left in a freely standing test-tube (it means at gravitation acceleration roughly 10 ms-2), it sinks down at the rate

In fact, no sedimentation would take place at all because diffusion would counteract against sedimentation. Apparently, to separate the particles, several orders larger acceleration must be used. 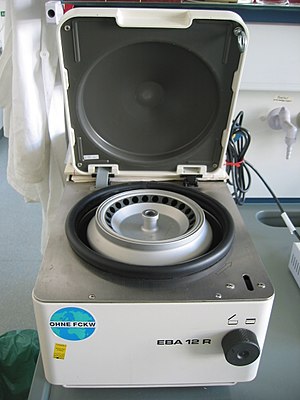 If small relative centrifugation forces (up to 20 000× g) are sufficient for separation of the mixture, simple low-speed centrifuges can be used. On the other hand, for sedimentation of small particles, ultra-centrifuges are used. The rotor of ultracentrifuge operates in deep vacuum which decreases its braking by air and heating up. Components of ultra-centrifuges must withstand enormous forces and therefore there are extreme demands on their manufacturing. The price of ultra-centrifuges is therefore very high.

Spinning at high rates leads to warming of sample due to friction with air. Moreover, biologic samples must frequently be handled at low temperatures. Many centrifuges are therefore equipped with cooling.

Centrifuged samples must be inserted in such a way that the rotor remains balanced. Centrifugal forces by which samples act on the shaft of the rotor must be canceled each by the other. It means that in the opposite positions test-tubes of the same weight must be placed. the higher is the centrifugation speed the more precisely the rotor must be balanced. For low speeds it is sufficient to use the same type of test-tubes and measure the same volume of samples to them. In contrary, for ultracentrifugation the test-tubes are weighted on scales and the volume of sample is adjusted so that the opposite test-tubes have exactly the same weight.