Hematopoiesis is the process of making blood in the body. The basic mechanisms provided by hematopoiesis are the proliferation and differentiation of pluripotent cells into unipotent cells, which are then adapted to perform their specific functions. It occurs postnatally in the bone marrow (medulla ossium). Prenatally, however, hematopoiesis takes place in different parts of the body depending on the period of gestation. 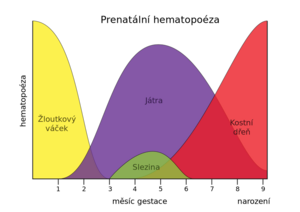 Postnatally, hematopoiesis in the bone marrow (medulla ossium) takes place. The bone marrow is the gelatinous tissue inside the bones. It fills the medullary cavity of long bones and the spaces between the beams in spongiosis. However, over the course of life, the microscopic structure of the bone marrow changes, according to which we distinguish its three types:

To examine the bone marrow, we take it from the sternum or from the scapula of the hip bone. Collection is painful for the patient, so it is necessary to use a local anesthetic. 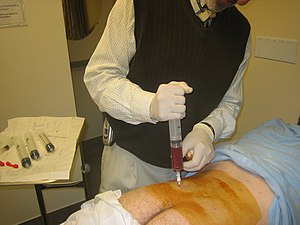 Like every event in the human body, hematopoiesis is carefully controlled by a number of regulatory mechanisms. They mainly provide the following events:

The majority are responsible for that matter different groups of cytokines, which act as colony stimulation factors (colony-stimulating factors, CSF). Two hormones - erytropoietin and trombopoietin- have a huge and irreplaceable role in controlling hematopoiesis . Both are produced by the kidneys (erythropoietin) and the liver trombopoietin.

The individual lines of development of blood elements are derived from a single group of pluripotent hematopoietic stem cells. Their further development represents a strictly controlled hierarchy from which individual cell lines can be derived. Every other type of hematopoietic cell arises as a result of the action of cytokines on the CSF. 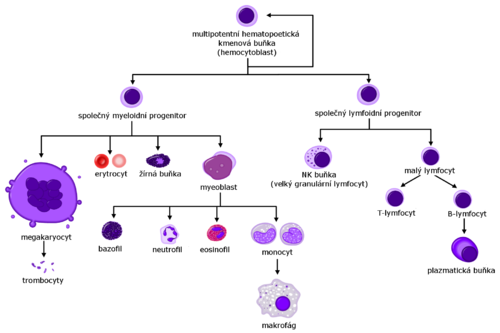 the lymphoid lineage develops together for all lymphocytes

We also call progenitor cells cells that do not have the ability to self-renew. Pluripotent cells are able to regenerate, so they cannot be considered progenitors. Precursor cells (precursors) jare also cells that already show clear morphological features. They develop from unipotent cells and their differentiation leads to the formation of a mature blood element. They contain the suffix -blast in their name (proerythroblast, megakaryoblast, myeloblast, monoblast, lymphoblast). The development of these elements leads to the creation of an already functional element.