'Chaperones' ([šeprony], from fr. Chaperons - gardedámy) are proteins involved in the folding of other proteins. Chaperones are applied in three ways [1]: 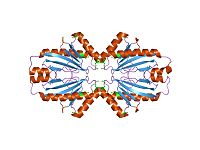 They are ATPases. Although they are similar to enzymes, they are not specific for their ligands. Formerly also referred to as "stress proteins" or heat shock proteins (HSPs). They were first described as proteins whose concentrations increase in Drosophila cells after exposure to high temperatures [2]. Their synthesis occurs during cellular stress, such as changes in temperature, cold, detergents, changes in pH, ionic strength, the effects of toxic substances and perhaps some foods. Thus, by synthesizing chaperones, the cell resists the denaturing effects of stress factors. Glucose regulated proteins are chaperones in the endoplasmic reticulum ( cold shock proteins ).