Tumor suppressor genes' (also called anti-oncogenes or recessive oncogenes) have an essential role in the malignant process. Their products regulate cell division. The loss of both alleles of a certain suppressor gene (e.g. deletion), a change in their structure (e.g. point mutation) leads to a disorder of cell cycle control ) or inactivation of the protein encoded by them. All this can result in a malignant transformation of the cell. Mutations in tumor suppressor genes have a ``recessive character. Unlike oncogenes, proteins encoded by anti-oncogenes have an antiproliferative effect, promote differentiation and apoptosis.

There are about 40 tumor suppressor genes in each somatic cell. To become tumorigenic, both of their alleles must be mutated – hence the name recessive oncogenes. This is related to the so-called double hit theory (first formulated by Knudson when explaining the occurrence of rare hereditary retinoblastoma). In contrast to the much more common sporadic retinoblastoma, where there are random mutations of one and then the other allele in the retinal cell, in the hereditary form one mutated allele is inherited. The relevant individual is a heterozygote in whom the inherited tumor predisposition is not yet manifested. However, if the second allele is mutated/eliminated, the development of a tumor clone of retinal cells is initiated. 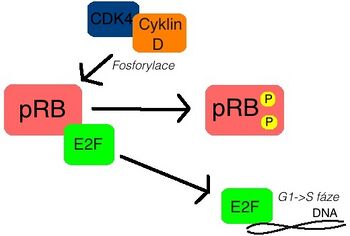 The first discovered tumor suppressor gene was called the retinoblastoma gene (RB1 gene)' and its product RB-protein (pRB). It occurs in every cell, where it regulates the cell division cycle.

Retinoblastoma gene (RB1) and another tumor suppressor gene TP53, respectively. their products act as a kind of brake on cell proliferation. RB1 negatively regulates the important transcription factor E2F. Deletion of the ``RB1 gene, which occurs in hereditary retinoblastoma, or sequestration of its protein product in the presence of adenoviral protein E1A or protein E7 (in human papillomavirus infection) induces unblocking of E2F suppression. In contrast, p53 acts by promoting the expression of p21/CIP, which is a potent inhibitor of cell cycle-regulating kinases (cyclin-dependent kinases).

Loss of the regulatory function of the Rb gene in the cell cycle or overexpression of c-myc leads to increased proliferation, but also to increased apoptosis of the affected cells. Virogenic products such as E1A (adenovirus infection), T121-antigen' (from SV-virus) or E7 (from human papillomavirus) bind to Rb and then have a similar effect. At this stage, the number of transformed cells does not increase yet. However, another genetic change, causing loss of p19ARF, mutation of p53, or overexpression of bcl-2, leads to increased proliferation and reduced apoptosis. Contributing to this are gene products such as E1b (from adenovirus), large antigen from SV-virus and E-6 antigen from papillomavirus, which bind to the p53 protein. Apoptosis, or the tendency to decrease it, is of key importance for the development of tumorigenesis.

The tumor suppressor gene TP53, which encodes the protein p53, is a key regulatory factor that monitors DNA damage. Inactivation of p53 is usually one of the first steps that leads to malignant transformation in the development of a number of cancer diseases. Patients with Li-Fraumeni syndrome usually have one mutant allele in their germ cells and thus an increased risk of developing sarcomas, leukemia and carcinoma of the mammary gland] .

Located on the short arm of chromosomeu 17 (17p13.1, OMIM: 191170), contains 393 codons, regulates the course of interphase, also called "guardian of the genome" . It reacts to DNA damage by temporarily suspending the cycle and thus enables error repair (the so-called big repair).

It controls the initiation and duration of the quiescent stage through genes whose transcriptional activity is controlled by its p53 protein.

The p53 gene is also used in the 2nd interphase checkpoint - by pausing the cell cycle in this period, it enables the so-called post-replication repair. Furthermore, it induces and coordinates apoptosis when DNA repair is not successful.