Mitosis is a type of the cell division. Before mitosis starts, it is necessary to replicate the chromosomes. The parts which are created during the replication are called "sisters chromatids". Later, they are separated by the mitotic spindle. The whole process takes about 160 minutes.

Mitosis has several phases that take place one after the other. They are called prophase, prometaphase, metaphase, anaphase and telophase.

Phases of the Mitosis[edit | edit source] 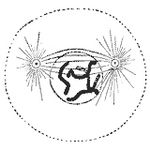 Disturbances of the Mitosis