Meiosis is the cell division in the sex cells. The result of the process is four haploid daughter cells. In mens sperm and female eggs. Haploid means that it has just one set of the chromosomes – 23 chromosomes. Normal tissue cells includes 23 pairs of the chromosomes and are called diploid. Reproductive cells have to be haploid because the zygote is formed by two haploid cell - egg and sperm.

The Course of Meiosis[edit | edit source]

Meiosis includes two nuclear divisions that takes place one after the other:

Meiosis is a type of a sexual reproduction. It is a base of the genetic diversity in offsprings. Meiosis has two parts – meiosis I and meiosis II. Each of them has 4 phases – prophase, metaphase, anaphase and telophase. 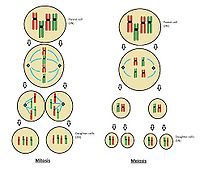 The main differences is in the metaphase and the anaphase. During mitosis the chromosomes line up at the equatorial line. All of them lie just in one line. Then in the anaphase they are separate into the individual sister chromatids. The parent cell has 4N (92 chromosomes) and two daughter cells have 2n (46 chromosomes).

Meiosis differs in that; during metaphase the chromosomes lie side by side. Then in the anaphase there is no division of the chromatid. The whole chromosome is pulled to the one pole of the cell. The parent cells have 4N (92 chromosomes) and the daughter cells have 2N (46 chromosomes). But that is just the first meiotic division. The second one takes place directly after - without replication of the DNA. It means that the daughter cell becomes "parent" and divides again. The result is a pair of the sex cell with 1N (23 chromosome). This we call the second meiotic division.

The Disturbances of Meiosis[edit | edit source]

The most important is the correct division of the chromosomes into the daughter cells. The mistake can occur in the first but also in the second meiotic division. It leads to the trisomy – an extra chromosome – or monosomy – missing a chromosome. We called it meiotic nondisjunction. The most famous disorder connecting with it is Down syndrome.