The treatment of diabetes mellitus varies greatly depending on the type of diabetes. Therefore, we will discuss individual types of diabetes and their treatment separately

In diabetu mellitu I. type autoimmune inflammation results in the gradual destruction of pancreatic B cells and thus the disappearance of insulin secretion 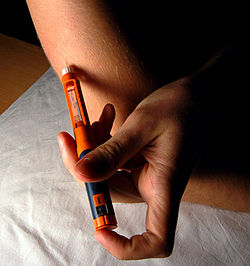 Insulins are divided into short-term and long-acting depending on the duration of their action. 'Shortacting: used as boluses before meals. The onset of their effect is from 15 minutes. up to 30 min. and the time of their maximum action is between 30 and 120 minutes.’Long-acting: used to cover the basal insulin requirement. They are applied either in one daily dose in the evening or in two doses in the morning and in the evening. The time of onset of their effect is in the range of 50-120 min. and acts for up to 24 hours. Premixed insulins : contain a combination of short-acting and long-acting insulin. They are not used to treat type I DM.

The most common and simplest route of administration is by using insulin pen. The most modern and physiological way is to deliver insulin by |insulin pump]]. The pump allows the delivery of boluses before meals (the patient chooses the number of units according to what he intends to eat) in combination with the continuous administration of a basal dose. Insulin syringe administration is no longer used. Intravenous insulin is reserved for emergencies only.

In patients with type I DM, emphasis is placed on controlled carbohydrate intake. According to the expected carbohydrate intake, the patient chooses the number of bolus units before a meal. The aim is therefore to prevent large fluctuations in blood glucose and to keep them in the optimal range. If the patient is taking human insulins, it is usually necessary to consume smaller snacks between meals to prevent hypoglycemia.

In the pathogenesis of diabetu II. typu, the development of insulin resistance is particularly important. Thus, insulin deficiency is not absolute as in type I diabetes, but relative. Therefore, in addition to insulin, we can also use drugs from the group of PAD (oral antidiabetics) for treatment , which have a positive effect on insulin resistance in particular.

It is the drug of first choice in the treatment of diabetes II. type. It works on the principle of reducing insulin resistance and thus contributes to the reduction of fasting glucose in particular. It is used in a wide dose range from 500 to 3000 mg. daily. A contraindication to its use is renal insufficiency with an increase in serum creatinine above 135 μg / l and conditions with severe tissue hypoperfusion (eg heart failure), where the risk of lactic acidosis increases. ‘Metformin must also be discontinued 48 hours before surgery and using an iodine contrast agent!'

They stimulate insulin secretion and thus primarily reduce postprandial glycaemia. Their disadvantages are the risk of hypoglycemia and weight gain. Thus, they are not the drug of choice for obese diabetics, but are suitable in combination with metformin. The most commonly used glimepiride and gliclazide can also be used in patients with mild renal failure in dose reduction.

They increase insulin sensitivity by acting on nuclear receptors. Again, they are used in combination with metformin. The side effects are an increased incidence of heart failure and weight gain.

They are the most modern of the PAD. They work on the principle of increased insulin secretion, but only in hyperglycemia. In normoglycemia, their effect does not apply, so unlike the sulfonylurea, they do not have the occurrence of hypoglycemia. There are two forms of administration. Oral dipeptidyl peptidase-4 (DPP4) inhibitors such as sitagliptin and the injectable GLP-1 agonist exenatide, which causes weight loss. Thus, incretins are particularly useful in combination with metformin for the treatment of obese diabetics.

It has II. type its specifics. Due to the presence of insulin resistance, a several-fold increase in insulin requirements can be expected, so 40 IU is often not enough. At the same time, the anabolic effect of insulin, which leads to weight gain, which is the case with DM II, must be taken into account. type particularly unsuitable. We combine insulin therapy with metformin treatment, which we do not discontinue from patients.

It is the simplest regimen, which consists of administering long-acting insulin once a day in the evening. The goal is to reduce fasting hyperglycemia.

It is advantageous because in addition to fasting hyperglycemia, it also affects postprandial hyperglycemia. Premixed insulin is given twice a day before breakfast and before dinner.

As with type I DM, the basal-bolus system is used. We access this mode only after the other options have been exhausted.

It has II. type eminent meaning. Lifestyle changes can reverse the course of the disease and lead to the disappearance of diabetes.

It is reduced in most diabetics to achieve a 5-10% weight loss. Particular emphasis is placed on reducing the intake of free carbohydrates, cholesterolu and animal fats. Dia foods are in most cases unsuitable because they are more caloric.

It is an integral part of the treatment and should be operated for at least 30 minutes. 4 times a week. It not only supports weight loss, but also has a positive effect on other cardiovascular risk factors (high blood pressure, lipids).

It is undoubtedly a promising treatment modality in diabetology. In obese diabetics who are difficult to compensate with standard treatment, it is 70 to 90% successful, depending on the type of surgery used. There is either a significant improvement in compensation or even a complete disappearance of diabetes. According to current criteria, a diabetic with a BMI over 35 kg / m2 is indicated for bariatric surgery.