Prions require only protein, and no nucleic acid, as the basis of their infectivity and pathogenicity. It is the protein alone that is the infectious agent. Defnition: "small proteinaceous infectious particles which resist inactivation by procedures that modify nucleic acids". Prion diseases are often called spongiform encephalopathies. All the diseases supposedly caused by prions affect mainly brain structures and neuronal tissues, and are untreatable and fatal.

In the 1960’s, radiation specialist Tikvah Alper, and mathematician John Stanley Griffith developed the hypothesis that the transmissible spongiform encephalopathies (TSE) could be caused by infections agents composed only by protein. It originated from the observation that the causative agent of scrapie and Creutzfeldt-Jakob disease was resistant to Ultra Violet radiation (which directly damages DNA molecules). In 1982, Stanley B. Prusiner isolated the hypothetic infectious prion, and coined the term “Prion” and “PrP” (for Protease resistant Protein, or Prion Protein). He was awarded the Nobel Prize in 1997.

The gene prnp codes for cellular prion protein (PrPc), which is present in the membrane of almost every cell of the body (not present in Purkinje cells, for example). Its function is not yet clarified and continues to be studied. Probable functions include:

The prnp gene is highly conserved, illustrating the importance of the non-pathogenic PrP protein.

A prion disease develops when the PrPc is changed to its pathogenic isoform, PrPsc (“sc” from “scrapies”, the most studied). The change occurs due to mutation of the gene (hereditary, sporadic), or by infection. 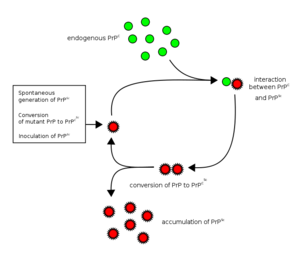 The diference between PrPc and PrPsc is found exclusively in the protein conformation: PrPc has a 42% α-helical and 3% β sheet morphology, while in PrPsc the proportions change to a predominance of β sheets. The amino acid sequence is exactly the same. 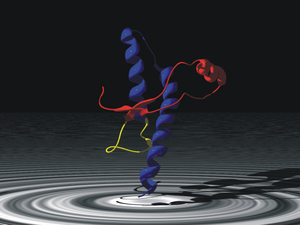 One can develop a disease of prion origin through several ways:

It should be stressed the danger that the prion diseases pose to global populations, since prions are more resistant to destruction than any other known pathogenic agent. They are more stable and long lasting than spores and cannot be neutralized by radiation. Furthermore, there are no routine procedures for their detection.

Pathogenic prions are the causative agents of the so-called spongiform encephalopathies, named after the sponge-like appearance of the affected brain tissue. This is consequence of the amyloid accumulation of PrPsc, which accumulates inside of lysosomes (they are resistant to protease K), eventually leading to their rupture, resulting in the cytoplasmic digestion by the lysossomal enzymes, and cell death.

Clinically speaking, prionic diseases present with extremely fast mental degeneration, like seen in eg. Alzheimer’s, but settled in 3-5 months, instead of years, as well as a rise of 14-3-3 protein level in CSF, a protein also risen in eg. acute encephalitis or brain infarction, ie. a sign of acute brain tissue destruction. Nevertheless, currently the only proof of the diagnosis is obtainable exclusively post-mortem.

Being a protein, to inactivate a prion it is necessary to denature it. Three procedures are recommended by the World Health Organization to sterilize heat-resistant surgical instruments in this manner:

Using Surround Optical Fiber Immunoassay (SOFIA) and anti-PrPsc antibodies, a team of scientists in 2010 reported being able to detect PrPsc in concentrations of 1/1011 in brain tissue.

There are studies of future therapies using anti-cytosolic PrPsc antibodies capable of crossing the Blood-Brain Barrier. It was also discovered that lichens (symbiotic organism composed of a fungus - the mycobiont - with a photosynthetic partner - the photobiont or phycobiont -, usually either green algae or cyanobacterium) can degrade prions.