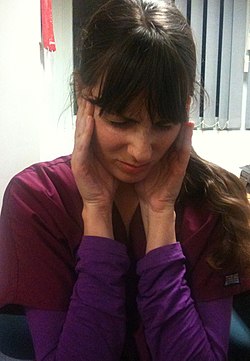 'Migrainous pain with a characteristic but non-uniform course is usually presented by a phase of variously combined prodromes - the so-called "aura". Typical are e.g. scotomas, nystagmus, sometimes tinnitus, dizziness, nausea, psychological irritability. In this phase, a predominant vasoconstriction of cerebral vessels can usually be registered. In the second phase, variously localized, fierce, pulsating headaches (limited, for example, to one half of the head) occur, lasting several hours, usually characterized by dilation of intracranial vessels. The next phase is usually a dull, persistent headache, originating primarily from the extravasal transudation of the plasma infiltrate, i.e. from the formation of perivascular cerebral microedema.

It has been proven that serotonin, which is flushed out in the beginning, plays an important role in the development of migraine. It has a vasoconstrictive effect on blood vessels and a proaggregatory effect on platelets, which corresponds to the early phase. However, its influence gradually leads to the development of perivascular inflammatory changes accompanied by vasodilation and increased permeability (a number of other transmitters including histamine are used here). This results in perivascular leakage of water and electrolytes and irritation of sensory endings in the meninges and blood vessels – the second phase.

Pharmacotherapy is guided by the above findings. It is polyvalent, with a greater chance of success if it is started early, i.e. preventively', especially in the prodromal stages. In this sense, the following are applicable:

In the stage of already developed migraine pain, depending on individual reactivity, it is possible to use either analgesics (mainly salicylates and non-steroidal anti-rheumatic drugs), on the one hand, by substances influencing blood vessel tone' - sumatriptan, ergotamine.