Transformation of a Synaptic Input Into Action Potential

Read this article before proceeding below: [[Transformation of Synaptic Input into Action Potential].

The role of synaptic input in formation of a neuronal response

Synaptic inputs that are located close to the trigger zone (axon hillock), are more effective in depolarizing and hyperpolarizing it than synaptic inputs of equal strength located further away. To overcome such disadvantage, peripheral synapses group together (multiple inputs from a single source) or they elicit various forms of dendritic spike potentials. From the point of further information processing, location of synapses is often decisive. Excitatory and inhibitory synapses can be located at various strategic points:

Such strategic positioning enables to more effectively inhibit or facilitate the conductance of postsynaptic potentials (detonators or permissive synapses), than synapses located at less important points (which end up being considered as stimulatory or modulatory synapses).

Synapses at which a dendrite delivers a stimulus to another cell play a large part in communication between neurons that lie close together. Over small distances (several millimeters or less), electrical signals can be propagated passively (electrotonically), spreading from postsynaptic sites on the dendritic membrane where they are received, to presynaptic sites on the same dendritic membrane, where they control the transmitter release. Such neurons sometimes do not even possess an axon and do not conduct action potentials. In some cells, where the dendritic tree is large, separate parts of it can behave as more or less independent pathways for communication and for information processing. In other words, it behaves as mediator where it collectively processes (summates) and relays the signals between dendrites. Furthermore, the presence of voltage-gated ion channels in the dendritic membrane might enable the dendrites to conduct action potentials, consequently having a single neuron that can behave as a highly complex computational device.

Synapses with channel-linked receptors show immediate effects of a neurotransmitter, at defined location of transmission.

The response, mediated by the non-channel-linked receptors takes typically hundreds of milliseconds or longer, usually because a series of enzymatic reactions must intervene between the initial signal and the ultimate response. One of the most important neuromodulators are monoamines.

Drugs designed to interfere with the synthesis, uptake, breakdown, or interact with particular subclasses of monoamine receptors have been proved to be valuable in the treatment of psychiatric and neurological diseases (Examples include: schizophrenia - blocking dopamine receptors, Parkinson's disease - increase in concentration of dopamine, severe depression - increase in concentration of norepinephrine or serotonin).

The neuropeptides are the largest family of neuromodulators. They appear to be particularly important in regulating feeling and drives, such as pain, pleasure, hunger, thirst, and sex. Neuropeptides are often secreted together with a non-peptide neurotransmitter.

The Role of Synaptic Plasticity in Memory

Neurotransmitters and neuromodulators released at synapses, besides relaying transient electrical signals, can also alter concentrations of intracellular messenger molecules, which activate enzymatic cascades that bring about lasting changes in the efficacy of synaptic transmission. However, several major mechanisms are yet unknown in regards to how do these changes endure for weeks, months, or a lifetime in the face of the normal turnover of cell constituents.

Physiologically, memories are caused by changes in the capability of synaptic transmission from one neuron to the next as a result of previous neural activity. These changes cause new pathways to develop for transmission of signals through the neural circuits of the brain (i.e.: memory traces). Once they are established, they can be activated to reproduce the memories.

The repetitive use of a synapse might enhance the efficacy of that synapse if the discharge of the postsynaptic cell is correlated with a particular input signal. This means that conjunction of postsynaptic firing and the presynaptic input would be the requirement for strengthening specific connections. This hypothetical construct has only recently found concrete support in the studies of the mechanism underlying long-term potentiation.

Experiments in animals have shown that high-frequency (100–200 Hz) tetanic stimulation of Ia afferent fibers for several seconds was followed by an enduring increase in the ventral root responses to subsequent Ia volleys. The duration of this potentiation depends on the duration of the tetanus (the effect of 7 min. tetanus lasts for almost 15 mins, whereas a tetanus of 20 mins caused enhancement lasting up to 2 hours). Posttetanic potentiation (PTP) that lasts for hours might be a possible mechanism for short-term memory, though its dependence on prolonged bursts of synchronous high-frequency stimulation of afferents has no clear counterpart in learning paradigms. PTP seems to be an entirely presynaptic phenomenon that results of an activity-dependent calcium accumulation in presynaptic terminal, which leads to an increased transmitter release.

The ability of a cell to respond to a stimulus and the nature of that response are determined by the various voltage- and transmitter-dependent conductances in its membrane. Thus, the two possible synaptic mechanisms just described must somehow result from changes in post- and presynaptic membrane conductances:

Most of the above changes are based on changes of activity of proteins (channels, protein kinases, etc). The synthesis of new proteins, initiated by the transcription of previously dormant DNA sequences may also change the nature of neuronal membrane, thus altering both pre- and postsynaptic function – result of activity of various second messengers (cyclic nucleotide, calmodulin, calcium).

G-protein-linked receptor can enable a transient signal to cause a persistent change in the electrical properties of a synapse and hence the behavior of the animal. The phosphorylation of Gs channels represents a form of short-term memory, easily erased by the action of phosphoprotein phosphates (dephosphorylation of Gs channels) and limited by the finite lifetime of the Gs-channel proteins. The mechanism of the long-term memory that follows repeated signal processing is not known, but it requires new RNA and protein synthesis and seems to involve changes in the structure as well as the chemistry of the presynaptic terminals. cAMP and A-kinase seem to mediate these changes too, presumably by phosphorylation other proteins which are able to alter the pattern of gene expression.

[edit part] Definition: "Long-term potentiation (LTP) occurs on any occasion when a presynaptic cell fires (once or more) at a time when the postsynaptic membrane is strongly depolarized (either through recent repetitive firing of the same presynaptic cell or by other means)."[2]

Most of the depolarizing current for excitatory PSP (Post-synaptic potential) is carried in the ordinary way by ligand-gated ion channels that bind glutamate. During LTP development, a second distinct subclass of channel-linked glutamate receptors - NMDA receptors (named so because they are selectively activated by the artificial glutamate analog N-methyl-D-aspartate). The NMDA-receptor channels are doubly-gated, opening only when two conditions are satisfied simultaneously: 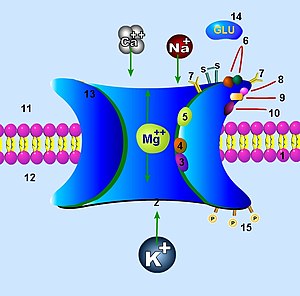 An animal treated with an NMDA inhibitor fails to learn/remember information of the type thought to depend on the hippocampus (declarative/reflexive type), but behaves almost normally otherwise.

NMDA channels, when opened, are highly permeable to Ca2+, which acts as an intracellular messenger, triggering the local changes responsible for long-term potentiation. On the contrary, LTP is prevented when Ca2+ levels are held artificially low in the postsynaptic cell (by injecting EDTA into it) and can be induced by transiently raising extracellular Ca2+ levels artificially high. The nature of the long-term changes triggered by Ca2+ is uncertain, but they are thought to involve structural alterations in the synapse.

The entry of calcium (after successful activation of NMDA-receptor channel) triggers number of events:

For memory consolidation, this process requires certain time: 5-10 minutes for minimal consolidation, 1 hour for stronger consolidation. This can occur by the rehearsal technique (as proven by psychological studies):