Glaucoma is a group of clinically distinct diseases of various etiologies that cause optic neuropathy and lead to an irreversible impairment of visual function. It is a multifactorial disease, for the development of which increased intraocular pressure is an important risk factor.

An imbalance in fluid drainage leads to increased intraocular pressure (IOP). This increased pressure pushes on the optic nerve and the retina.

This continuous pressure leads to eventual ‘cupping’ of the nerve, leading to loss of vision. It starts with loss of peripheral vision, and then loss of central vision and eventual blindness.

If the drain remains closed, the pressure accumulates giving the eye the appearance of frosted glass along with intense pain, nausea and vomiting.

Closed-angle attacks are present in the Acute type of Glaucoma. They can occur where the drainage is completely closed off causing spikes in IOP and mild degrees of damage. However, repeated attacks cumulate to cause extensive damage. A sign of this attack is a headache around the eyebrow. 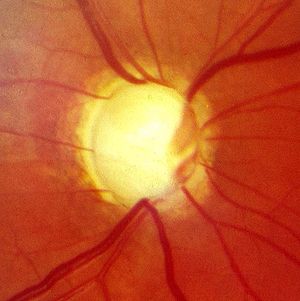 Excavation of optic nerve caused by a long-term glaucoma

Glaucoma with a closed chamber angle often begins under the picture of recurring so-called small seizures (several hours of headache with iridescence or blurred vision) and then leads to an acute attack of glaucoma.

The basic mechanism of acute glaucoma attack (in English terminology acute primary angle-closure) is a complete circular occlusion of the outflow tracts of the iris-corneal angle by the anterior surface of the peripheral part (root) of the iris. With partial occlusion, an acute attack of glaucoma does not occur and the condition may manifest itself in a clinically insignificant increase in intraocular tension (or a so-called small attack accompanied only by a short-term transient cephalea, or with irisation). There are two ways to occlude the iris angle (pulling the iris tissue into the angle during mydriasis and pushing the iris root forward during the pupillary block) and they can complement each other.

1. The peripheral part of the iris can be pulled to an angle, thus blocking the outflow tracts. The most common initial mechanism is a significant dilation of the pupil to 6 mm or more - in the dark, in sleep or under stress. Occlusion is caused by anatomical predisposing factors - a shallow anterior chamber, a narrow iris-corneal angle around 20 °, and the ciliary body configuration forming a plateau iris (slit configuration of the iris-corneal angle) plays a crucial role. Secondly, an acute attack of glaucoma can be induced by an anatomical predisposition to drugs (preparations with a mydriatic effect).

2. The second completely different mechanism is the pushing of the periphery of the iris forward, while again the occlusion of the outflow paths (trabecules) occurs at the iris angle. The essence is the formation of a pupillary block (between the posterior surface of the pupil and the anterior surface of the lens) in the middle mydriasis 4–5 mm on anatomically predisposed eyes. Fluid begins to accumulate in the posterior chamber and pushes the iris root forward, softening the periphery of the anterior chamber until the outflow tracts are occluded by the anterior surface of the iris. An increase in the intraocular pressure of up to 70 torr causes paresis of the pupil sphincter, which leads to mydriasis and exacerbation of angle occlusion. High intraocular pressure reduces eye perfusion, leads to acute retinal ischemia, due to the slow blood flow a thrombus may form resulting in occlusion of the optic nerve papillar arteries and can result in total amaurosis (complete blindness of the eye without light projection) within a few hours of the onset of clinical symptoms. The evoking moment can only be the pronation position of the head, when the lens, due to gravity, rests on the back of the pupil and causes its occlusion - the pupillary block. The closure of the drainage paths at an angle is again conditioned by anatomical factors - the size of the bulb, the free-hanging apparatus of the lens and its size. Secondary the pupillary block occurs when the pupil is occluded or secluded after inflammation or injury, or when the lens swells with age or injury. An acute attack of closed-angle glaucoma with typical clinical manifestations can thus occur even in the originally anatomically completely normal eye. A special form of an acute attack of angle-closure glaucoma is malignant glaucoma with a completely disappeared anterior chamber, arising iatrogenically after operations or after injuries.