Detection of occult bleeding - FOB (Fecal Occult Blood) must be specified in terms of clinical indication. Setting the cut-off value of the concentration of hemoglobin in stool is then a crucial question of the laboratory test. Physiologically, 0.5-2.5 ml of blood is lost daily in the stool. If we calculate this amount with hemoglobin concentration in blood (120-150 mg/ml) and the amount of stool in 24 hours (300-450 g), then we can consider the values of 0.3-1.3 mg hemoglobin per 1 g of stool to be physiological. This means that those concentrations should not be deemed as a positive FOBT.

There are two different approaches to detecting blood in the stool

For the screening procedure, the recommended test is Guemocakult Test - Haemoccult (gFOBT). Screening, as an initial method of detecting colorectal tumors in asymptomatic individuals, should be performed by a test that meets the established criteria. Screening programs are based on repeated assessments at regular intervals of one to two years. In case of a positive test result, a targeted gastroenterological (endoscopic) examination must follow to clarify the cause of the test positivity. For these reasons, immunochemical tests that have significantly higher sensitivity and provide 4-7% false positivity cannot be used for screening. In the study performed by ÚKBLD 1. LF UK and VFN, the haemoccult test showed a positivity in 2.8% of cases in more than 95,000 asymptomatic patients. In comparison, false positivity tested with immunochemical tests was zero. Controlled FOB screening significantly reduces the incidence of colorectal cancer. 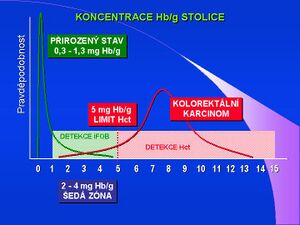 Concentration of blood [Hb/g] in the stool

Immunochemical tests (iFOBT) are suitable for the detection/exclusion of bleeding in symptomatic patients, where the occult bleeding test is one of a number of examination procedures. Sensitivity and positive detection are also significantly affected by the different degradation of hemoglobin components with respect to the proximodistal gradient in the digestive tract. Globin is degraded much faster, and the use of an immunochemical test eliminates the possibility to detect bleeding in the upper gastrointestinal tract. Heme degradation is significantly slower, so chemically oriented FOBT tests, such as haemoccult, are sensitive to bleeding from higher areas of the GIT. Hemagglutination, latex immunoprecipitation, radial immunodiffusion and immunoaffinity chromatography tests are based on the immunochemical principle. Detection of protein (human hemoglobin) by monoclonal antibodies eliminates the possibility of exposure to other sources of hemoglobin (for example food). Also no interference from chemicals can occur, and no special diet is required. No interference from chemicals is here, so no special diet is required. The sensitivity of immunochemical tests is significantly higher - as long as the technique is good and there is less than 0.1 mg hemoglobin/g stool. Quantitative determination of hemoglobin - qiFOBT - correlates with rate of bleeding of precancerous lesions (adenoma) and colon tumors. Studies in recent years have tested several immunochemical analyzers for the quantitative determination of blood in stool, these studies were mainly done in Japan. ROC curves show 95.3% specificity for advanced adenomas at a sensitivity of 100 ng Hb/mL. If we compare gFOBT and iFOBT by the OC method the sensor shows 3 times greater detection of advanced adenomas and carcinomas by the iFOBT method.