Disorders of the Sex Chromosomes

These disorders are considered very common with incidence of about 1:400–500. Phenotypes associated with sex chromosome disorders are less severe than autosomal defects and this is mainly due to X chromosome inactivation, as well as the fact that Y chromosomes have a low gene content. X chromosome inactivation is the the process by which most genes on one of the two X chromosomes in females are silenced epigenetically and randomly, and so fail to produce any product. In somatic cells in normal females (but not in normal males), one X chromosome is inactivated early in development, thus equalizing the expression of X-linked genes in the 2 sexes. Thus females are mosaic with respect to X-linked gene expression.

Klinefelter syndrome, 47,XXY, or XXY syndrome is a condition where human males have an extra X chromosome.

Males normally have a chromosomal makeup of XY, but an affected individual with Klinefelter syndrome will have at least two X chromosomes and at least one Y chromosome.

The syndrome was named after Dr. Harry F. Klinefelter, who was an American rheumatologist and endocrinologist. Between 1941 and 1942, Klinefelter went for one year to Boston to work at the Massachusetts General Hospital. It was here, under the supervision of Fuller Albright, that the syndrome was first described in 1942. 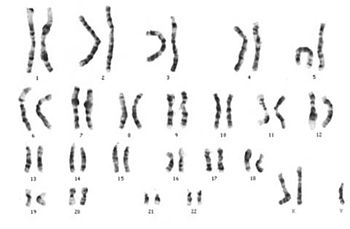 Karyotype of an individual with Klinefelter syndrome (47,XXY)

During stage I or II of meiosis (sex cell division) a nondisjunction can occur which retains the extra X chromosome and cause the Klinefelter syndrome.

Mammals normally have more than one X chromosome, but the genes from only one is expressed. This is due to X-inactivation. This is a natural process which can be seen in female mammals, XX. In the XXY male, a few genes located in the pseudoautosomal regions of their X chromosomes, have corresponding genes on their Y chromosomes and are capable of being expressed. These triploid genes present in cells of male, may be what is causing the symptoms for Klinefelter syndrome.

The cause of the excess X chromosome in the karyotype is nondisjunction during the first or second part of gametogenesis, or nondisjunction in an already formed zygote. Nondisjunction usually occurs when the chiasms of homologous chromosomes fail to divide correctly - either prematurely, late, or not at all[1]. However, it has been shown that a more common cause of aneuploidy is chromatid misdistribution, than whole chromosomes[2]. The inheritance of Klinefelter's syndrome has not been proven; it is assumed that the main cause is premature separation of sister chromatids in the gonads, with the same probability of aneuploidy occurring both paternally and maternally[3]. Aberrant recombination plays a significant role in the development of aneuploidy from the parental side, in most KS affected there was no recombination in the PAR region between Yp / Xp[4].In mothers, it can occur during cross-over between X chromosomes.

Another possible cause is the older age of the mother. The first mitotic divisions of the zygote control the mother's proteins and RNA - with increasing maternal age, the probability of zygote division errors increases, if they occur, aneuploidy may occur again and KS, but then mosaicism arises[5]. The influence of the father's age is not demonstrable on KS[6].

Although KS has inactivated the X chromosome similarly to women, not all genes on the X chromosome are inactivated. These genes are consequently much more expressed than in a man with a common karyotype - as a result of which the function of the testes is affected (especially the negative effect on fertility)[7].

An obvious correlation between phenotype and genotype in KS is the polymorphism in the number of CAG repeats in the androgen receptor gene. The result is modulation of androgen sensitivity - a shorter number of repeats corresponds to a higher sensitivity to androgens, in patients with KS there is a link between longer recurrence of CAG repeats and microorchidism, delayed development and infertility[8].

Some (about 10%) males have only the extra X chromosome present in some of their cells. This is described as mosaic Klinefelter syndrome, and can be described with some variant of mosaic karyotype (e. g. 46,XY/47,XXY). This means that some of the cells from an affected individual will show a normal karyotype, while other cells can show the karyotype of Klinefelter syndrome. These individuals usually show milder signs and symptoms of the condition, but this again depends on the number of cells expressing the affected trait.

The main symptoms include[9]: 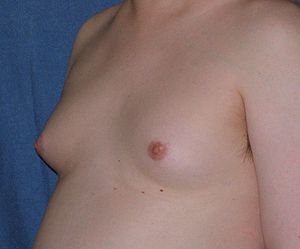 The phenotype of the affected person is basically male, tall stature with elongated lower legs and forearms. The body shape, however, is more feminine (narrow shoulders, broad hips) with a lower muscle mass. One third of affected individuals show gynecomastia (abnormal development of mammary glands in male resulting in breast enlargement). The risk for male breast cancer and osteoporosis is also increased.

One of the main symptoms of this condition is infertility that arises in the beginning of the third decade at its latest. The infertility is a result of atrophy of the seminiferous tubules. The testicles and penis of an affected man are small (< 10 mL, 2 cm), and the individual also express low libido and impotence.

As noted above, fertility is very rare in cases of Klinefelter syndrome, and it usually ceases in the beginning of the third decade when testicles are increasingly hyalinized.

The IQ can be reduced by 10–15 points. However, mental retardation is not a stable clinical feature of Klinefelter syndrome.

Most common method for confirming the diagnosis is standard karyotyping. This procedure is done to see whether the patient has a presence of extra X chromosome. A positive karyotype would be 47,XXY; 48,XXXY; 49,XXXXY etc.

Prenatal testing can also be performed. Chorionic villi sampling and amniocentesis are two common methods where the fetus tissue is extracted and their DNA is isolated and genetically tested for abnormalities.

Other tests that can be performed includes; semen count; and blood tests checking hormone levels.

Klinefelter's syndrome according to ICD-10:

Life expectancy is normal, yet the morbidity and mortality tends to be higher.

The genetic disorder itself is irreversible. But testosterone therapy has shown to help with gaining a more masculine appearance:

Since most affected individuals can not make a woman pregnant, assisted reproduction specialists are available for help (IVF using sperm from the donor).

This syndrome is typically characterized by a 45,X karyotype in females (in about 50% of cases), with the absence of one X chromosome (and therefore absence of a Barr body). The single X chromosome is of maternal origin in about 70% of cases; therefore there is loss of a sex chromosome due to paternal error. Other possible variations include: 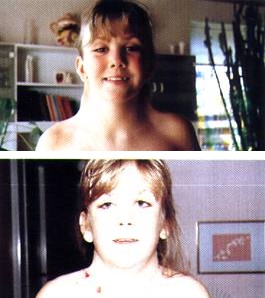 Its incidence is about 1:2000 (less common than Klinefelter's) and it is present in about 1.5% of all conceptions.

Patients present with the following features:

There is no actual cure for this syndrome but treatments can be done to alleviate some of its symptoms, e.g. growth hormone, estrogen replacement therapy, and reproductive technologies (to get pregnant as they are infertile, donor egg cell is needed).

It has an incidence of about 1:1000 male live births. It may be caused by paternal non-disjunction at meiosis II (producing a YY sperm) or by a post-zygotic event. Variants of this syndrome include XXYY and XXXYY, which probably also originate from paternal non-disjunction at both meiosis I and II. Patients are usually phenotypically normal and may have the following features: