A cataract is the change in clarity of the natural lens inside the eye which gradually affects visual quality as it changes from slight to complete opacity and follows with the obstruction of the passage of light.

In many developing countries, they are the leading cause of blindness.

The role of the lens is to focus light onto the retina (found at the back of the eye). It then transforms this light into a neurological signal which is then interpreted by the brain as vision.

The lens is composed mainly of crystallins (water-soluble proteins responsible for maintaining clarity) and water. Over time, the structures of these proteins are altered which in turn causes the lens to become cloudy, affecting its ability to focus light. 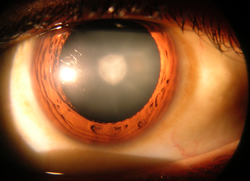 Cataract present in a Human Eye

This is most common type of age-related cataract and is some signs include blurred vision, fading of colours and nearsightedness.

They are the second most common type of cataract and are related to ageing and farsightedness.

Less common than the other types but affects vision quickly and more severely out of the three. It can present with extreme sensitivity to bright lights and extreme difficulty reading.

Nuclear cataracts occur when the central portion of the lens is most affected (nucleus of lens substance).

This causes the lens to curve in shape leading to worsening of nearsightedness. Often it can temporarily improve farsightedness but the result is short-lived. Nuclear cataracts are slow-progressing and may not impact vision for many years.

Nuclear cataracts are often associated to

Cortical cataracts are those affecting the cortex of the lens substance.

Cortical production results in a harder/sclerotic lens. Therefore, as natural ageing progresses, cortical production increases. Approximately, around the age of 60, around 15-17% of the lens becomes cortex, affecting vision.

This form of cataract involves the development of opacity around the lens capsule (posterior portion is affected mostly).

The only effective treatment for cataracts is surgery to remove the cloudy lens and replace it with an artificial lens.

Cataract removal can take place at any stage of cataract development. Therefore, most people choose to remove their cataracts when their vision is affecting their life.

The surgery is done with a local anaesthetic, is painless, takes about 30-40 minutes and most people go home a few hours later.