The Brainstem is a lower (infratentorial) part of the brain, which consists of tmedulla oblongata, pons Varoli and midbrain (mezencephalon). Pons and medulla are also sometimes called bulbar region. Brainstem is a connection between cerebrum and spinal cord and includes huge number of nerve fibres, so even small damage usually leads to severe clinical symptoms. All neural pathways have to pass this region (motor control and autonomic functions). 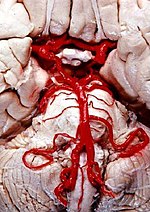 As it was said above, brainstem is a connection between cerebrum and spinal cord, so all motor pathway have to pass this relatively narrow region (mainly through pons). If there is any damage, we lost your voluntary movement ability, which is usually connected with total paralysis.

Brainstem is also a centre of autonomic functions of a body (especially medulla), which are necessary for survival (breathing, heart rate, blood pressure or digestion). Patients with brainstem injury need some kind of supportive therapy because of it (artificial nutrition or respirator).

Sleep and attention are also managed from this area of ​​the brain.

Nearly all cranial nerves (excluding I and II) have their origin in the region of brainstem nuclei.

The hypoxia of brainstem is mainly connected with some vascular disorders of basilar artery (arteria basilaris), which is formed by two vertebral arteries and lies on ventral part of pons. People with ischemia of basilar artery suffer from vertigo, vomiting, diplopia or fault stability. Disorder of art. basilaris (it bifurcates into posterior cerebral arteries) can also leads to stroke.

If there is any injury (traumatic, ischemic,...) of the brain and we want to discovered, if also the brainstem is affected, we can examine the brainstem reflexes:

There are few specific syndromes connected with brainstem injury: