Unresponsive Wakefulness Syndrome (UWS) is a very serious brain damage, when cortical parts of the brain are disconnected from brainstem. Brainstem is a center of respiration, gastrointestinal coordination, heartbeat and cranial nerves. It is formed by medulla oblongata, pons and mesencephalon. Another involution syndrome is locked-in syndrome, which is quite opposite to apallic. 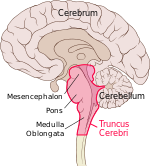 All functions of brainstem are preserved. It means that patients can breathe on their own and blood circulation runs with no problem. It means that there is no need of supporting by medical devices. From time to time we can find also some movements — especially as a reaction on painful stimulation. It does not mean that affected person is able to react. In fact their cortical part of the brain is dead. They can not perceive the surrounding.

Compared with people in coma, apallic patients very often have their eyes open. It seems they can look around. In fact it is just a sign of intact brainstem and cranial nerves. According to the gravity of syndrome they can swallow (mild cases) or they need also a nutrition cure (severe cases).

At first it can be a diffusion damage of whole brain. But some parts of the brain can be repaired - it is a case of brainstem. Why? This part is phylogenetically very old, compared with cortex, which is quite young. Thanks to cortex we are able to do complex processes. Brainstem just keeps basic reflexes and vital functions. That is a reason why apallic people have very strong sucking and sexual reflex.

Nowadays, there is no way how to cure the patients at all. We can just offer them a palliative therapy. They can live for months, with a good care for years, then they usually die. The main reasons are some infections or dysfunction of heartbeat. The younger they are the higher chance of some progression they have. But it leads, at best, to organic psychosyndrome.