Electrocardiograph (ECG reading device) captures differences in electrical potential on the surface of the skin, which arise due to depolarization and repolarization of cardiac muscle. Graphic recording is called electrocardiogram. This record is gained by electrodes, amplified by amplifiers and graphically done on paper or screen.

ECG shows the heart irritation but does not show contraction (which can be viewed by other methods such as echocardiography, cardiac ultrasound examination). Oscillations and waves of the ECG are the result of projection of the total electric dipole of heart muscle - the heart vector.

Vector ECG indicates the direction of propagation of the resulting electrical potential. The resultant vector ECG is given by the size and location of individual parts of the heart.

Electrical heart axis (Figure 3.5) refers to the general direction of the heart's depolarization wavefront in the frontal plane (depolarization chambers) and is influenced by the anatomical location of heart in the chest. 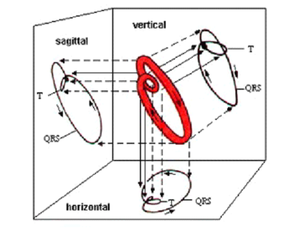 Bipolar limb leads according to Einthoven (Figure 3.6) - referred to as standard leads - have been used since the beginning of electrocardiography. There is a lot of experience with them and cannot be overlooked in routine practice. They record cardiac potentials projection to the frontal plane. In a bipolar connection is measured potential difference between two active electrodes. Leads are designated by Roman numerals I, II, III.

If we connect these three points we get the well-known Einthoven’s triangle. If we mark potentials as Φ R (right hand), Φ L (left hand) and Φ F (left feet) we limb potentials as:

Unipolar limb leads (Figure 3.7) captured by Wilson's technique (VR, VL, VF) have the disadvantage of small fluctuations and therefore unipolar leads are used according to Goldberger (aVR, aVL, aVF), where the A’s mean augmented. They are unipolar leads, each lead-indicates the potential of one electrode. Each reference point in the circuit is made up of two resistors connecting the remaining electrodes. 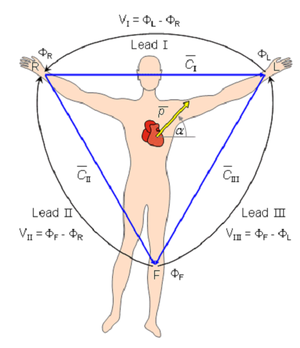 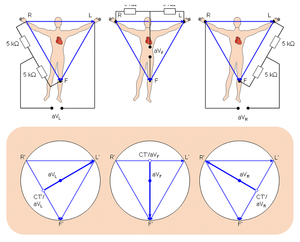 The potential is given by: A typical ECG tracing of the cardiac cycle (heartbeat) consists of a P wave, a QRS complex, a T wave and a U wave which is normally visible in 50 to 75% of ECGs. The baseline voltage of the electrocardiogram is known as the isoelectric line. Typically the isoelectric line is measured as the portion of the tracing following the T wave and preceding the next P wave.

Depolarization, repolarization and ventricular fibrillation lead to the emergence of different waves and oscillations in ECG. There are three waves: P, T, U three oscillations Q, R, S and these gives intervals PQ, PR, QT, PT, that are used to determine status of heart (Figure 3.9 and 3.10). P wave - During normal atrial depolarization, the main electrical vector is directed from the SA node towards the AV node, and spreads from the right atrium to the left atrium. This turns into the P wave on the ECG.

QRS complex - the QRS complex reflects the rapid depolarization of the right and left ventricles. They have a large muscle mass compared to the atria and so the QRS complex usually has much larger amplitude than the P-wave

S-T interval - the ST interval is measured from the J point to the end of the T wave.

Q-T interval - the QT interval is measured from the beginning of the QRS complex to the end of the T wave. A prolonged QT interval is a risk factor for ventricular tachyarrhythmia and sudden death. It varies with heart rate and for clinical relevance requires a correction for this, giving the QTc

U wave - the U wave is hypothesized to be caused by the repolarization of the interventricular septum. They normally have low amplitude, and even more often completely absent. They always follow the T wave and also follow the same direction in amplitude. If they are too prominent we suspect hypokalaemia, hypercalcemia or hyperthyroidism usually.