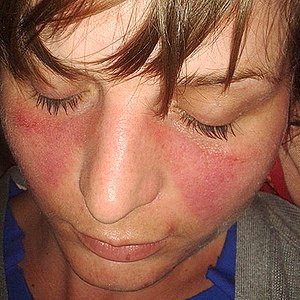 Systemic lupus erythematosus (lupus erythematosus disseminatus) is a serious autoimmune disease with a significant prevalence in women. It is characterized by multiorgan involvement, including organs necessary for life (especially the kidneys and brain). The basic laboratory feature is excessive overproduction of autoantibodies to intracellular antigens.

The following are particularly provocative in the manifestation of the disease: sun exposure, drugs and estrogens (hormonal contraceptives). The so-called drug lupus can be provoked by chlorpromazine, hydralazine, procainamide, isoniazid, penicillamine and other drugs. Hematoxylin bodies (glomeruli, endocardium and elsewhere) are a typical finding: they contain DNA from decayed nuclear material and immunoglobulin (probably antinuclear autoantibodies).

Newborns of mothers with SLE and / orSjögren's syndrome are at risk of developing neonatal lupus. It is an autoimmune disease caused by the passive transfer of antibodies from mothers to the fetus. It mainly manifests heart and skin problems..

The most serious complication is a disorder of the cardiac conduction system, typically a complete AV block, which occurs in about 2% of women with anti-Ro / SSA anti-Ro/SSA (Sjögren syndrome type A antigen) and / or anti-La / SSB antibodies (Sjögren syndrome type B antigen). Any degree of block may occur and may be accompanied by valve abnormalities, endocardial fibroelastosis and / or dilated cardiomyopathy. In pregnant women with anti-Ro / SSA and / or anti-La / SSB, repeated fetal echocardiography is appropriate for early diagnosis of fetal heart block and ev. initiation of dexamethasone, which crosses the placenta. Heart block may be already prenatal (usually occurring between the 18th and 20th week of pregnancy), but is often diagnosed at birth (such as bradycardia when listened to after birth). In the most severe cases, children may need a pacemaker, but most children are relatively asymptomatic in childhood and have difficulty adolescent with increased workload such as syncope.

The cutaneous manifestation of neonatal lupus is in about 4-16% of children of mothers with anti-Ro and anti-La antibodies, but sometimes with RNP (ribonucleoprotein) antibodies. Skin manifestations are usually evident at birth. Annular erythematous deposits with mild flaking are typical, appearing mainly in the hair, neck or face (typically periorbital), but also on the trunk and limbs.

Rarely, neonatal lupus may manifest as hepatic (elevated aminotransferases and / or conjugated bilirubin, hepatosplenomegaly) or hematologic (cytopenia). Haematological disorders (haemolytic anemia, thrombocytopenia, neutropenia) may occur within the first 2 weeks of life and disappear within 2 months of life. Skin, hepatic and haematological problems are only transient and disappear spontaneously by 4-6 months of age (when maternal antibodies disappear). Rarely, neurological complications may also occur in children of mothers with anti-Ro antibodies, such as hydrocephalus, so sonographic examination of the brain is appropriate. Pneumonitis, which manifests as tachypnea or tachycardia, may also occur.

Pregnant women with SLE are at increased risk of fetal growth restriction and preterm birth.

Neonatal lupus can also occur in children of completely asymptomatic mothers who are unaware of the presence of autoantibodies, and the first manifestation may be fetal bradyarrhythmia or neonatal rash.[1][2]

Most women with SLE can breast-feed, however, some medications may pass into breast milk. Immunosuppressants (azathioprine, methotrexate, cyclophosphamide, mycophenolate) are contraindicated and long-acting non-steroidal anti-inflammatory drugs are not suitable. Hydroxychloroquine passes into breast milk and increases the risk of kernikter. Breast-feeding is possible with the use of short-acting NSAIDs, antimalarials, low doses of prednisone (ie up to 20 mg / day), warfarin and heparin.[2]