Relationships between acid-base balance and ionogram

The relationships between acid-base balance and metabolism of major ions are divided into two groups for clarity:

When we talk about short-term maintenance of acid-base balance, we are talking about blood buffers - especially the bicarbonate and hemoglobin systems. However, intracellular buffers behave in a very similar way. They are mainly involved in bicarbonates, proteins and phosphates.

It is easy to imagine that in acidemia, some of the "excess" protons will enter the cells in which it will be buffered. This transferred the cation across the plasma membrane; this change would therefore in itself lead to a change in the membrane potential. Therefore, instead of a proton, another cation crosses from the intracellular to the extracellular space. Because the conductivity of the plasma membrane is the highest of the major ions for K+, it will be mainly potassium.

Acidemia by the described mechanism will lead to hyperkalemia. The total amount of potassium in the body does not increase, only its distribution between compartments changes. From the point of view of the organism as a whole, potassium depletion will even result from acidemia, as its renal losses will increase (so more severe and prolonged acidemia will be accompanied by potassium depletion in the current hyperkalemia).

Hypokalaemia accompanies alkalemia by analogy. However, the whole mechanism works the other way around: hyperkalemia causes acidemia and hypokalemia causes alkalemia. We can simply imagine that potassium cations are being exchanged for protons on the plasma membrane .

In an acidic environment, the carboxyl groups are in the protonated, undissociated state (-COOH). Upon alkalization, they begin to buffer, dissociating into the carboxylate -COO - . The carboxylate can bind divalent cations very efficiently, especially Ca 2+ , especially if several carboxylate groups are close together (which is common in proteins). This means that changing the pH does not change -COOH to -COO - and vice versa, but to a more complex process, which is shown in the figure: We can also say that the pH of the environment depends on what part of the calcium will be ionized and what part will be non-ionized. Even in this case, we can summarize the whole story by a simplified statement that protons and calcium ions are exchanged on plasma proteins.

Psychogenic hyperventilation is involved in the pathogenesis of hysterical seizures. It leads to hypocapnia and thus to respiratory alkalosis and alkalemia. The mechanism described above decreases the concentration of ionized calcium, resulting in an increase in neuromuscular excitability. This further deepens the psychogenic attack, closing the vicious circle. The result is a fall with convulsions and an apnea pause. During a short breath, the pCO 2 is adjusted, the pH returns to normal, as well as the ionized calcium and the episode ends. As part of first aid, the affected person breathes in a bag - this is sufficient to maintain oxygen saturation, but it prevents excessive losses of CO 2 .

Controlled hyperventilation as a means of increasing neuronal excitability is also used in a targeted manner, for example during EEG recording. 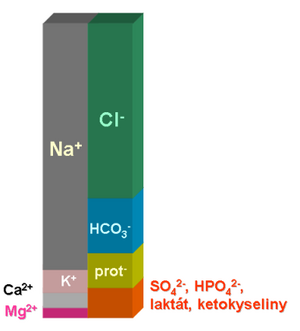 The relationships between acid-base balance and ion economy are closely intertwined. The main reason is the fact that one part of the bicarbonate buffer has no charge (H 2 CO 3 or CO 2 ), while the other component is charged (HCO 3 - ). The bicarbonate anion must therefore be in equilibrium with the other ions in order to maintain the electroneutrality of the internal environment. Nothing like this applies to the partial pressure of carbon dioxide, its regulation can be largely independent. According to the Henderson-Hasselbalch equation, the pH of the internal environment depends on the ratio of the bicarbonate concentration and the carbon dioxide partial pressure.

During vomiting, a large amount of Cl - is lost with gastric juice. The concentrations of the other major ions do not change. To maintain electroneutrality, the anion deficiency will be supplemented by an increase in bicarbonate concentration. Ventilation is usually maintained, pCO 2 does not change. This means that the ratio in the Henderson-Hasselbalch equation changes in favor of the conjugate base, and so-called hypochloremic alkalosis develops. 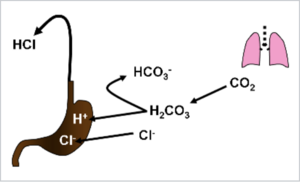 It would be misleading to interpret metabolic alkalosis during vomiting as a consequence of gastric acid proton loss. This will be seen if we deal with the origin and fate of individual ions. Upon HCl secretion, H + actively transport gastric mucosal parietal cells by a proton pump. Cl - passes to the luminal side passively in order to preserve the electroneutrality of the whole process. The source of protons is the dissociation of carbonic acid; H + is secreted, the bicarbonate is returned to the blood. In summary, we can describe the whole process as replacing blood chlorides with bicarbonates, as we did in the general explanation above.