The genome of prokaryotes is usually made ​​up of one ''chromosome'' and plasmids. Eukaryota however, contain a larger number of chromosomes - we distinguish two types of eukaryota´s chromosomes (nuclear and mitochondrial) and sometimes even plasmids.

Most of what we know about the chromosomes of prokaryotes have been obtained from studies of E.coli – it is the organism of choice for such research of prokaryotes. Chromosome consists of double–stranded circular DNA. Prokaryotes do not contain nucleus or other membrane bounded organelles. The term "prokaryotes" actually means "before nucleus". Chromosome is stored in a special area called nucleoid.

The genome of prokaryotes is often significantly larger than the cell itself. How is it possible that the genetic information does fit into the cell? Eukaryota solves this problem by wrapping DNA around the histones. However, prokaryotes do not contain histones (with a few exceptions). Prokaryotes to compress their DNA using fiber rolled into small rolls – supercoiling (Figure.1). The fibers are twisted so tightly that the final consequences loops overlap to form one big ball. Distinguishes two types of collapse – positive (DNA turns are in the same direction as the helix) or negative (DNA is coiled in the opposite direction than the helix). Most bacteria during normal growth is negatively coiled.

Prokaryotes reproduce asexually most often and are haploid (there is always only one copy of the gene). Prokaryotes often contain several plasmids (extrachromosomal stored DNA molecule – linear or circular). Unlike chromosomal DNA, plasmid DNA is typically smaller and encode genes that are not necessary for survival. Often, however, give to the cell some advantage (eg resistance to antibiotics,...). Replication of plasmids is independent of chromosomal replication.

Prokaryotes need to cram all their genes within one chromosome,so it doesn´t remain too much space for the non–coding sequences. While in eukaryotes, the share of non–coding parts of DNA is about 98%, in prokaryotes it is only 12%. 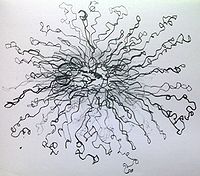