Movement is a major characteristic of living organisms. All living cells are capable of movement in some respect. It can take the form either of movements of cells or of movements within cells themselves. Cell movement is based on the existence of the so-called motive molecules which, on reaction with cytoskeletal structures, generate movement at molecular level.

Actin and myosin are responsible for the contractility of the muscle cells, but movement as a result of the interaction of actin and myosin is exhibited by many other cells as well. The main biophysical function of myosin is conversion of ATP energy into the mechanical force, which enables gliding of actin filaments over myosin molecule.

The crawling movement is the result of cytoplasmic streaming into cellular extensions called the pseudopodia. The potential mechanisms include changes of the colloidal states of actin (gel-sol tranformation) and a change in polymerization. This movement strategy is seen, for example, in lymphocytes during their role in the inflammatory response.

Cells from a wide variety of tissues are capable of movement. Typical of this are fibroblasts. Their movement is determined by their attachment to the substrate, whereby complicated structures are formed in the contact areas between the cell and its substrate. They are made up of special proteins in the cell membrane (integrins), which connect with other proteins on the inner side (actin filaments) and outer side of the cell (proteins of substrate).

Similar mechanism of movement can be found in nerve axons (growth cones) which contributes in development, or regeneration of the nervous system after injury. Adhesion molecules in the membrane of cancer cells may link with the cytoskeleton to maintain stable adhesive contacts, but alternatively may interact with the actin cytoskeleton and so enhance invasive migration, and metastasis.

Cell division consists of nuclear division and cytoplasm division known as cytokinesis. Cytokinesis is accomplished by a bundle of actin and myosin filaments forming a contractile ring in the cortical cytoplasm. The ring is an example of purpose-built temporary actin-myosin structures. 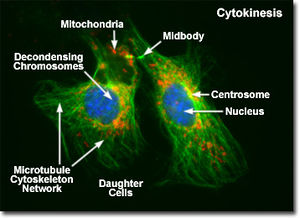 Some of the most dramatic cell movements occur in embryos during early development. During gastrulation and also in later stages of development, starting with the formation of the central nervous system at neurulation, the repertoire of collective and individual cell movements involved is very varied. All movements involve cooperation of adhesive systems between the cells and their actin cytoskeletons to generate the forces involved.

The periodic circular flow of cytoplasm primarily due to cell nutrition. Cytoplasmic streaming occurs along actin filaments in the cytoskeleton of the cell.

Microtubules provide a system of tracks for membrane-type organelles (Golgi complex, endoplasmic reticulum) to move along the cell. Mechanical energy required for this movement is obtained from ATP through motive molecules, in this case represented by a group of proteins called kinesin and dynein.

Diagram of a vertebrate nerve cell showing the extended axon and a number of short dendrites. The polarity of the axonal microtubules is shown, and the bidirectional anterograde (outward) and retrograde (backward) transport along the axon is indicated.

Certain higher cells possess motile appendages - cilia or flagella - on their cell surfaces and use these either for swimming or for moving fluid over their surfaces. The common characteristics of both moving projections is their structure, the basis of which is the main cylinder (axonema) arranged of microtubules and surrounded by a projection of the cytoplasmic membrane. The principle of the movement is the sliding action of microtubules in the central cylinder.

Cilia are about 0,25 mm in diameter, 2-10 mm long and occur on the cell surface in great number. They beats via a rapid sideways bending – the effective stroke – and this is followed by a slower recovery stroke in which a wave passes from its base to the tip to return the cilium to its original position. Cilia occur extensively on the epithelia, where they serve to move fluid over the cell surfaces, for example, in the lungs and airways, the eustachian tubes, the middle ear, the pharynx, the lining of the brain, as well as in the female reproductive tract.

Flagella have the same diameter as cilia but are much longer (10-200 mm) and a cell has only one flagellum or just a few. They normally propagate bending waves of constant amplitude from their bases to their tips. The beating of flagella results in the forward propulsion of the cell. The flagellum is used by the motile male gamete, sperm, to swim through the fluids within the female genital tract.

The cellular movements are critical for normal embryogenesis, tissue formation, wound healing and defense against infection. It is also an important factor in diseases such as cancer metastasis, and birth defects. Hence, the cytoskeleton and cellular motion is an important topic in biomedical research.