From Wikipedia, the free encyclopedia

The oculo-cephalic reflex (OCR) is a reflex eye movement that stabilizes images on the retina during head movement by producing an eye movement in the direction opposite to head movement, thus preserving the image on the center of the visual field. For example, when the head moves to the right, the eyes move to the left, and vice versa. This reflex can be tested by the Rapid head impulse test or Halmagyi-Curthoys-test, in which the head is rapidly moved to the side with force, and is controlled if the eyes succeed to remain looking in the same direction. When the function of the right balance system is reduced, by a disease or by an accident, quick head movement to the right cannot be sensed properly anymore. As a consequence, no compensatory eye movement is generated, and the patient cannot fixate a point in space during this rapid head movement. In comatose patients, once it has been determined that the cervical spine is intact, a test of the vestibulo-ocular reflex can be performed by turning the head to one side. If the brainstem is intact, the eyes will move conjugately away from the direction of turning (as if still looking at the examiner rather than fixed straight ahead). Negative Doll's eyes would stay fixed midorbit, so having negative "doll's eyes" is a sign that a comatose patient's brainstem is not intact. There is one very important contraindication of this examination - trauma of a cervical spine - because we could seriously injured patient. Sometimes a result can be false-positive thanks to influence of some medication (anesthesia). 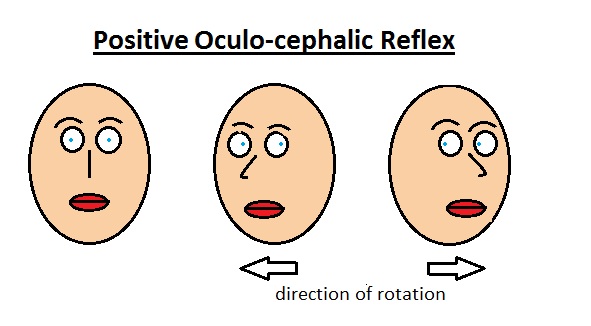