Motor neurons are cells, which are able to coordinate a motoric function of our body by their influence on contraction and relaxation of the muscles. They are also sometimes called efferent neurons, because they lead information from central nervous system to muscles and tell them what to do. 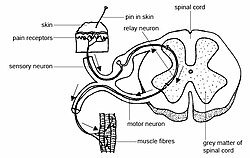 Motor neuron in a spinal cord

We can divide motorneurons according to the target systems:

Lesions of the motorneurons[edit | edit source]

A lesion of the motoneuron can be on the upper or on the lower part of a system, but the result is similar in both cases - movement disorders. There are few types of a classification and one of them is a division on the positive and the negative symptoms. Another classification is based on on the degree of disability.

Comparison between central and periferal lesion of motorneurons[edit | edit source]