Escherichia coli (EC) is a gram-negative bacterium that is a common commensal of the large and small intestine. E. coli causes: 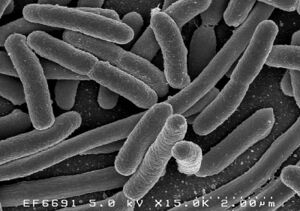 Escherichia coli in an electron microscope.

This bacterium is found in the vast majority of warm-blooded animals. It is part of the physiological microflora of the large intestine and the distal part of the ileum. A person is colonized almost immediately after birth, most often by alimentary route or transmission from an already inhabited individual. E. coli is unable to exist outside the host for a long time. Therefore, its finding (eg in drinking water) indicates contamination with feces.

Penetration into the body is similar to other strains. The microbes then adhere to the brush border of the enterocytes . Verotoxin (shiga-like toxin) then enters into the bloodstream through the disrupted epithelium , leading to damaged erythrocytes and platelet aggregation and the subsequent formation of hyaline thrombus. Together with the released substances from damaged epithelium (especially endothelin), thrombi thus contribute to the failure of blood flow through the kidneys and the so-called hemolytic-uremic syndrome develops .

Disruption of the intestinal mucosa is associated with leakage of fluids and blood into the intestine. This leads to severe bloody diarrhea that mimics shigellosis .