The pituitary gland (Lat. Glandula pituitaria/ hypophysis) is the central organ of the endocrine system. It is located behind the chiasma opticum, in the depression of os sphenoidale called the Turkish saddle (sella turcica), in its deepest part - the fossa hypophysialis. It hangs on the stem (infundibulum), which extends from the hypothalamus – from the base of the diencephalon. It is largely superior to all other glands in the endocrine system.

It can be divided into pars distalis, pars tuberalis, and pars intermedia.

Hormones of the pituitary gland

The pituitary gland is located in sella turcica

The pars intermedia is the section between the posterior and anterior pituitary lobes. There are closed follicles of various sizes, so-called Rathke's cysts, which are lined with a monolayer epithelium and contain a colloid. Furthermore, we find beams of chromophobic cells and also basophilic melanotropic cells secreting melanocyte-stimulating hormone (MSH).

The neurohypophysis has two basic structural components - the pars nervosa and the infundibulum. Pars nervosa consists of axons of neurosecretory cells of hypothalamic nuclei, pituitary cells (type of astrocytes), and fenestrated capillaries. It has no glandular structure and does not synthesize any hormones.

Pituitary gland - neurons of the neurohypophysis

Neurosecretory cells, found mainly in the supraoptic nucleus and paraventricular nucleus, send unmyelinated axons to the neurohypophysis. This connection together forms the hypothalamohypophysial tract (tractus hypothalamohypophysialis). The axons form large dilatations filled with basophilic neurosecretory granules called Herring bodies. The contents of the granules are synthesized in neurosecretory neurons and released into the capillaries in the neurohypophysis. The granules store oxytocin, which is produced in the paraventricular nucleus, and antidiuretic hormone (ADH, vasopressin) from the supraoptic nucleus. Pituicytes are glial cells belonging to the macroglia that surround unmyelinated axons, thus supporting them. 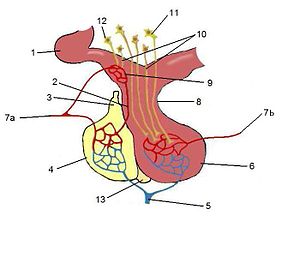 Vessels of the pituitary gland

This arrangement serves to ensure that hormones affecting the activity of the pituitary gland, released by the neurosecretory neurons of the hypothalamus into the primary capillary plexus, reach the site of action - the adenohypophysis.

To the neurohypophysis leads also the arteria hypophysialis inferior, which also goes to venae hypophysiales.

Stimulation and inhibition of pituitary hormone release are controlled from the hypothalamus by hormones that are synthesized in the bodies of hypothalamic secretory neurons and released into the primary capillary plexus by unmyelinated axons.