The hypothalamus produces a hormone called gonadotropin-releasing hormone (GnRH). When GnRH is released, it travels along the hypophyseal portal system and binds to secretory cells of the anterior pituitary (adenohypophysis). Binding of GnRH stimulates these cells to produce luteinizing hormone (LH) and follicle-stimulating hormone (FSH), which are then secreted into the bloodstream. From here, LH and FSH go on to produce different effects in both sexes, namely through the production of estrogen in females and testosterone in males.

In females, the HPG axis is mainly involved in the regulation of the menstrual and ovarian cycle. Once the anterior pituitary releases LH and FSH into the bloodstream, these hormones signal the ovaries to produce estrogen and inhibin, which play important roles in the reproductive cycle. Both estrogen and inhibin possess properties that can suppress the production of GnRH. Estrogen directly inhibits GnRH production via a negative feedback loop. Inhibin indirectly inhibits GnRH production by inhibiting the protein complex activin.

The preparation of the ovarian follicle is done through a positive-feedback loop that involves both estrogen and LH. Release of the ovarian follicle into the uterus leads to the production of progesterone from the ovary. Progesterone has a negative effect on the positive-feedback loop of estrogen and LH as it inhibits the hypothalamus and consequently the anterior pituitary. This production of progesterone from the ovary is taken over by the fetus if conception occurs. If it does not occur, the level of progesterone in the bloodstream decreases and this decreases the negative-feedback on the hypothalamus, which allows it to produce GnRH and thus stimulate the anterior pituitary to produce and release FSH and LH, preparing the female for the preparation of the next ovarian follicle.

The hormones of the HPG axis also contribute to the secondary sex characteristics of females. These include, but are not limited to, growth of breasts, erection of nipples, growth of body hair, increasing width of hips, and increased muscle mass in the muscles posterior to the femur.

Once FSH is released into the bloodstream, it binds to sustentacular cells, specifically the Sertoli cells. These cells release a protein called androgen-binding protein, which increases the concentration of testosterone to allow for spermatogenesis. Once testosterone is produced and secreted via LH binding with the interstitial cells, it binds with androgen-binding protein to maintain spermatogenesis. Too much testosterone will lead to the hormone having a negative-feedback effect on the hypothalamus.

The hormones produced by the HPG axis also contribute to secondary sex characteristics in males. These include, but are not limited to, body hair growth, facial hair growth, increased muscle mass, deepened voice, and greater shoulder width. 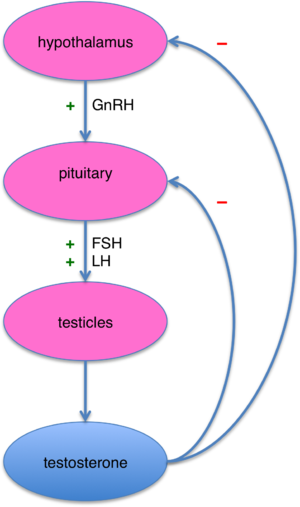