Huntington's disease (HD) also known as Huntingtons chorea is degenerative neurological disease arising from irregular expansions of glutamine (CAG) repeats. The number of the repeats are inversely proportional to the on-set of the disease. It is an autosomal dominant disease, hence it does not skip generations.

The mean on-set of the disease is 35-45 years of age. The slow progressive neuronal death associated with HD is phenotypically characterised by progressive motor, cognitive, and physical abnormalities.

Currently, no curative treatment are available for HD.

The gene affected is found on chromosome 4, on the short (p) arm 16.3 and is the huntingtin gene (HTT), which codes for the protein product huntingtin (Htt). The wild type (normal) of the huntingtin gene contains a highly polymorphic CAG nucleotide repeats (which code for glutamine) in the first exon to the 5' end. The disease occurs due to expansion of the CAG repeats in this exon. Different lengths of this area cause different times of on-set of the disease: the wild type contains 10-26 repeats; 28-35 intermediate (unaffected); 36-40 reduced penetrance (the disease may not be fully expressed, so patients may or may not be affected); mutant alleles contain >40 affected.

Of the patients with Huntington's 3% are thought to have developed the disease from a new mutation (de novo), whereas 97% have inherited it from one (or more) of their parents. A possible cause of the extension of CAG repeated sequence in huntingtin maybe slippage of DNA-polymerase during spermatogenesis.

Within cells, huntingtin may be involved in signalling, transporting materials, binding proteins and other structures, and protecting against programmed cell death, the mutated form is cleaved by caspases, which creates a toxic product that kills cells. The CAG repeats promote abnormal aggregation's of polygluatmine near the nuclei of the neurons, mainly in the corpus striatum. 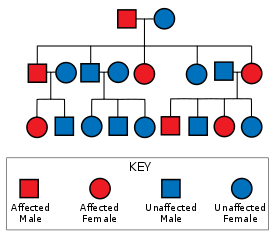 Diagram showing classic pedigree with autosomal dominant trait such as Huntington's. The father possesses the gene thus is affected while the mother is unaffected ;The affected offspring also have affected children. The probability of each offspring inheriting an affected gene is 50%. Inheritance is independent of gender, and the phenotype does not skip generations.

The gene causing Huntington's disease is autosomal dominant, this means that mutant allele (H) masks the effect of the wild type allele (h). Therefore the phenotypes look like this:

As the HTT gene is on chromosome 4 the inheritance is not determined by sex, however individuals inheriting the mutation from their father have a greater risk of early onset of the disease, approximately 80% of patients with juvenile-onset Huntington's disease inherit the mutant Hd gene from their father. 97% of Huntington's disease suffers have inherited the mutant gene. Due to the dominance of the mutant allele (H) if one parent is heterozygous for the huntingtin gene (Hh) and therefore is affect by the disease each child has 50% chance of inheriting the disease, as shown in this punnet square.

If looking at a pedigree for Huntington's, the disease with not skip a generation (unless there is incomplete penetrance). This leads to a characteristic pedigree, and is a valuable tool in diagnose and calculating possible risk for siblings or future children. People with HH genotype are rare due to the rarity of the disease, but may happen with consanguineous families. The effect of possessing 2 mutated genes is thought accelerate the onset of the disease.

Around 1/10-20000 Caucasians have the disease, this is higher than other ethnicities.

The average age of onset is 35-45 years and the mean survival after diagnosis is 15-18 years. Approximately, 25% of patients develop HD after the ages of 50 years and 10% before the age of 20years.

The patient’s age at disease onset is inversely proportional to the number of CAG repeats, although, the number of CAG repeats does not correlate with other features of HD. Hence, tandem repeats do not affect the severity of symptoms in HD. The slow progressive neuronal death associated with HD is phenotypically characterised by progressive motor, cognitive, and physical abnormalities

Currently, no curative treatment is available for HD. Instead, therapy focuses on supportive care as well as pharmacological management of behavioural and neurological problems

Transplant of Embryonic Stem Cells (ESG) appear in some cases to repair and rejuvenate the damaged area.

Researchers in the University of Leeds have noted that a naturally occurring protein in the body is causing some of the disruption in the brains of HD patients. Its effects may be modified and controlled by using drugs that are currently being used to help cancer patients.

Unfortunately, it is likely to be years before these developments will result in an effective treatment.

A large problem with Huntington's is the late on-set of the disease. This brings about further issues.

It is possible for sperm eggs to be screened and selected against the gene, so any found with the gene my be discarded. If a foetus is found to be carrying the disease the mother may opt to abort it, which has the obvious ethical issues. Stem cells used in possible treatments also carry ethical issues.

Many people if they know they have disease commit suicide before the disease takes hold, or in the early stages, which some people view as wrong. Other people may wish to end their lives with help when the disease has taken hold (euthanasia) which also causes large ethical debates.