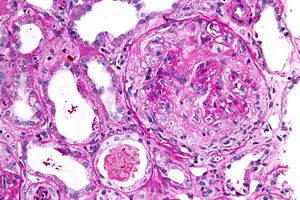 Goodpasture syndrome is a very rare disease. It only affects 1 in a million. It is more common among caucasians. There are no proven correlations with pathogen infections. It is however more frequent during spring and summer.

GS is most commonly presented in females around the age of 60. They usually only have glomerulonephritis.

GS is most commonly presented in males around the age of 30. They have both glomerulonephritis and pulmonary hemorrhage.

The antibodies are directed against the globular NC1 domain of the α3 chain of collagen IV. This epitope is present in basement membranes of kidney, lungs, choroid plexus, the uveal tract, the thymus and the cochlea. There is however very rarely that GS patients presents with anything other than glomerulonephritis and pulmonary hemorrhage. Although a few may develop ocular lesions, none become deaf. This is due to the avaialability of the epitope. Glomerular basement membrane is constantly available since glomerular capillaries are fenestrated. This allows the antibodies to react with the basement membrane. Capillary endothelium in alveoli, which have tight junctions, would have to be damaged before antibodies can react with the basement membrane.

The predominant symptoms of lung damage are massive hemoptysis, chest pain and episodes of dyspnoea . In the kidneys, it is often erythrocyturia to hematuria, proteinuria (swelling), hypertension and increased urea.

There is a linear binding of IgG along the glomerular basement membrane. The antibodies activate the complement which again recruits neutrophils and macrophages that causes damage to the tissue. This causes disruption of the membrane integrity, allowing larger molecules and cells of the blood to leak out into the urine. The results are proteinuria, hemauria and oliguria.

The autoantibodies are mainly of the IgG1 and IgG4 subclasses, but in one third of the cases IgA and IgM autoantibodies are also present. Even though improvement are directly related to the fall in circulating autoantibodies, the antibodies alone are not able to produce the classical Goodpasture Syndrome. There is also increasing evidence of cell-mediated immunity playing a part in both initiating and maintaining the disease. The mechanism is unknown, but GS is likely to be a T-cell-dependent immune response.

The diagnosis of Goodpasture's syndrome is quite complicated due to rather non-specific symptoms. Kidney biopsy with evidence of linear immunofluorescence along the GBM (IgG and C3) and circulating anti-GBM antibodies are reported to be the most reliable methods. Their titer correlates with severity during diagnosis. In 90% of patients can be found a crescent in biopsies. The detection of anti-GBM antibodies may be preceded by the finding of ANCA antibodies in the blood. The differential diagnosis then includes the aforementioned ANCA positive vasculitis. The disease affects both the kidneys and the lungs in 80% of cases, the kidneys in 10% and the lungs in the remaining 10%. The syndrome is more common in men and smokers between the ages of 20 and 30. The second peak is between the ages of 60 and 70.

Goodpasture syndrome is fatal if left untreated. Before the treatment arrived, mortality rate was almost 100%. Death was either caused by end-stage renal failure or pulmonary hemorrhage. Immunosuppressive therapy, intensive plasma exchange to remove circulating autoantibodies and administration of corticosteroids(prednisolone) and cytotoxic drugs(cyclophosphamide) has proven quite successful. Patiens with a creatinine level <500μmol/L had a 100% survival rate after 1 year with this treatment. However the prognosis of the disease is serious, only 50% of patients will survive 2 years.