Medical parasitology is becoming increasingly important. Although the incidence of the disease is declining in developed countries, with the worldwide spread of AIDS, the symptoms worsen and the pathogenicity of the parasite increases. The entry of the parasite into the human body is most often the digestive tract and damaged skin and mucous membranes. The prevalence of parasitosis is highly dependent on the level of hygiene, the availability of uncontaminated water, the method of preparation and consumption of meat and other factors. Some parasites are widespread worldwide - roundworms, others occur in a limited area - tropical parasitosis. 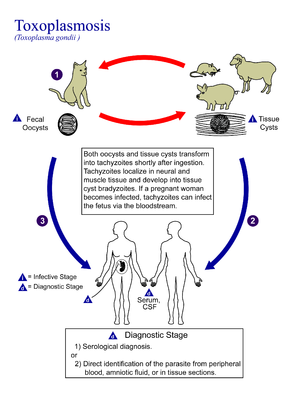 Medical parasitology: is part of parasitology, which focuses on human infections caused by parasites, the relationship between human and parasite, treatment procedures and more.

Parasitism: is a relationship between two organisms. One of them - the parasite lives at the expense of the other - host and to some extent harms and uses it. During the discovery of new species, there are often disputes over whether the case is parasitism, commensalism or predation (predation is generally said if the process is fast and limited to direct killing and digestion of the host, parasitism is a longer-term relationship) .

Parasite: An organism that uses another organism for its life.

Interhost: is an organism in which the infectious stages of parasites are found, their partial development has taken place in it, but the parasite has not reached full sexual maturity in the intermediate host.

Parathenic (transport) host: an organism that transmits the parasite but in which it does not develop.

Definitive host: an organism where the sexual development of parasites takes place (it does not take place in all parasites) and after reaching sexual maturity it is able to reproduce sexually. However, it may not be the final host and the parasite may spread from it (eg from infected insects). In the definitive host, the parasite thus reaches sexual maturity as well as sexual reproduction.