Higher blood pressure in portal vein expands in all the veins that carry blood to the portal vein. There are anatomical junctions between gastric vein (→ portal vein) and esophageal vein (→ superior vena cava). These junctions are called portocaval anastomoses. Because of the higher venous pressure, these junctions become dilated, and this pressure can be transferred to esophageal veins as well. Esophageal veins are localized in submucosa, over the muscular layer of esophagus. There is scope for the development of varices, which can expand into lumen of esophagus. Their perforation and bleeding is just a question of time.

These varices are usually localized in distal part of esophagus, at the esophago-gastric junction. They can rarely be found higher in the esophagus or lower in the stomach. 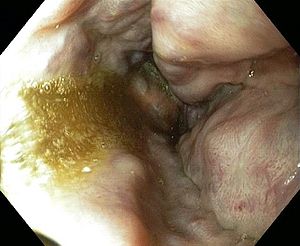 Gastroscopy is the only diagnostic method, which can prove existance of esophageal varices (visualization) and bring therapeutic solution in the same moment.[1]

Every patient suspected of esophageal varices bleeding should be hospitalized in ICU and treated like every patient with massive blood loss:

Acute gastroscopy is necessary! It can be the only solution how to stop bleeding.

The endoscopic treatment methods are:

Another treatment method is acute TIPS or surgical shunt (decompression of portal system).[2]