Diagnostic use of ultrasound

It is a widely used, easy to apply and non-invasive examination.

In addition to the classic ultrasound imaging, new technologies in the field of hardware and software of ultrasonic devices allow us to create spatial reconstructions (3D ultrasound ) and monitor dynamic processes (Doppler effect).

The ultrasound device consists of a computer unit with reconstruction software and an ultrasound probe. This probe acts as a transmitter as well as a receiver of ultrasonic waves . The principle of the ultrasonic device is based on the fact that when ultrasonic waves propagate through the environment, they are reflected. These reflections are not always the same and depend on the environment through which the wave passes. These reflections are received back by the probe and the software can reconstruct the ultrasound image based on the difference in reflections.

The principle of ultrasound[edit | edit source]

Ultrasound is sound with such a high frequency that a person can not hear. It propagates through the environment like a wave of alternating thickening and dilution of molecules. The wave source is a piezoelectric crystal in an ultrasonic probe.

Different tissues have different echogenicity - the ability to reflect ultrasound waves (Ultrasound in various media and tissues). The ultrasound strikes the tissue interfaces as they pass through the body, which are places where one tissue is adjacent to another, such as the kidney cortex and the surrounding fat.

is the simplest ultrasound imaging, used today in ophthalmology to measure intraocular distances before surgery. According to the word "amplitude", "A" is a deviation.

is a two-dimensional view. The individual deviations correspond to different bright points ("B" according to the English "Brightness"). The probe transmits ultrasonic waves in one plane.

(„Doppler ultrasound“) in the examination of the heart and blood vessels (Doppler echocardiography).

Ultrasound waves are reflected in a gaseous environment, so sonography is unsuitable for intestinal imaging, colonoscopy and CT are often used here. Another limitation is the difficulty of penetrating the bones, and here we prefer X-ray imaging.

Your doctor will send you to an ultrasound of the abdomen if you have pain of unclear origin, if you have suspected kidney or gallstones, to rule out internal bleeding, if you suspect cancer, and if you have many other problems. When examining the abdomen, we mainly examine echo-contrasting abdominal organs, such as the liver, spleen, pancreas or retroperitoneum - kidneys, adrenal glands, aorta, lymph nodes.

With the help of ultrasound, which works on the principle of reflection, recording and display of the signal, it is possible to very successfully recognize both pathological formations and, for example, the size deviations of individual organs. However, the accuracy of this test is often reduced by the presence of more air in the stomach ingested with food or excessive flatulence. The most obvious result of the ultrasound examination is in lean patients with a small amount of subcutaneous fat and in people examined on an empty stomach. 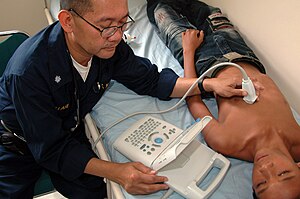 The heart examination itself can be performed in two ways - transthoracically and transoesophageally. Transthoracic examination of the heart - an ultrasound probe is attached to the chest. Transesophageal examination of the heart - an ultrasound probe is inserted into the esophagus. The esophagus is located more dorsally than the heart, so that the heart can be examined from a posterior point of view, thus eliminating or confirming the presence of a thrombus in the atria. Heart arrhythmia, such as ventricular fibrillation, can lead to imperfect atrial emptying, which can cause a thrombus that, if ruptured, can clog blood vessels in the brain - causing a stroke or other vessels in the large bloodstream.

With the help of ultrasound, the doctor finds out the size, structure and blood supply to the thyroid gland. He recognizes, for example, the presence and activity of inflammation. Ultrasound also serves to distinguish lymph nodes from cysts that have a cavity inside. 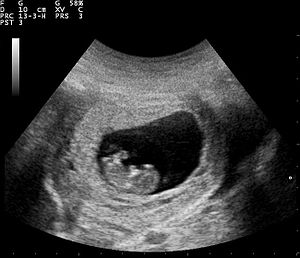 More and more gynecologists own an ultrasound machine. The uterus, fallopian tubes and ovaries can be examined through the abdominal wall or using a vaginal tube. This is a safe and painless examination.

The baby is examined by ultrasound at least four times during the intrauterine life.

The first examination verifies the pregnancy and checks the place of nesting of the egg in the uterus. The mother and fetus undergo the second ultrasound in 11th-14th week, the aim is to detect serious birth defects and determine the age of the fetus (according to which the date of birth is estimated).

The third examination is performed at the age of 18-23 weeks and serves to examine the fetus more accurately and to detect developmental defects.

Last ultrasound between 30th and 32nd week of pregnancy again checks the fetus, its position, but also the condition of the placenta and the amount of amniotic fluid..

Increasingly popular is the 3D and 4D ultrasound offered by some assisted reproduction centers and maternity hospitals, the fourth dimension is time, so parents take home a 3D photo and DVD with a short recording of a moving baby in the womb. It is best performed between the 28th and 30th week of pregnancy, and health insurance companies only pay for it in exceptional cases.

Ultrasound is the most widely used imaging technique in urology, and the prostate is examined when benign hyperplasia is suspected and to rule out cancer.

In urology, there are two possible images of the prostate: transabdominal ultrasound through the abdominal wall and more accurate transrectal ultrasound using a probe inserted into the rectum. A possible prostate biopsy (tissue sampling for microscopic examination) is performed under ultrasound control. At the same time, ultrasound determines how much urine remains in the bladder after urination. The swollen prostate makes it difficult to urinate.

Ultrasound is used for as yet unossified fontanelles - especially frontal. During this examination, mainly developmental anomalies of the brain, hydrocephalus - wider ventricles, are detected. Subdural and intracerebral hemorrhage after injury are also monitored. In premature babies, ischemic changes in the brain are often observed - cerebral anemia. Last but not least, brain tumors can be detected.

It is a method that allows the examination of the digestive tract using an ultrasound probe. The ultrasound probe is introduced into the examined area, through the mouth into the esophagus, stomach and duodenum, small intestine. The endosonographic method is mainly used to examine the pancreas and mucosal and submucosal changes of the esophagus, stomach and duodenum. Furthermore, thanks to it, it is possible to examine the adjacent lymph nodes.