Deep brain stimulation (DBS) is a surgical method, which is used for treatment of some neurological diseases, especially Parkinson´s disease and essential tremor, but also other (e.g.: epilepsy). Nowadays, it is a therapy of „the second choice“ for patients, who don´t have a good reaction on medication. However, DBS can´t cure Parkinson´s disease (because it is still incurable disease) it may alleviate its symptoms for some period of time. There are just a few specific indications, so not everybody, who suffers from Parkinson´s disease can undergo this surgery. 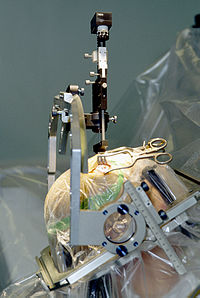 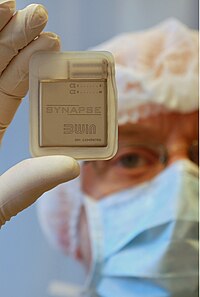 How It Is Done?[edit | edit source]

The first step is to find the correct place of brain stimulation (target), where the pathological nerve impulses, which are responsible for Parkinson´s disease symptoms, are produced. The most common are basal ganglia (globus pallidus, nucleus subthalamicus) or thalamus. The localization is determined by MRI or CT.

The result varies from patient to patient and i tis hard to say something in general, but most of the patients after DBS can reduce the amount of medications. There i salso very good influence on dyskinesias, involuntary movement, which occur after a long-term using Parkinson´s disease treatment. What more, they may improve or even completely dissapear.

The duration of effect is still uncertain and we can´t even say before surgery, if there will be any positive effect at all. That is the reason, why is still BDS used just in case, that we can´t help patient with medication.