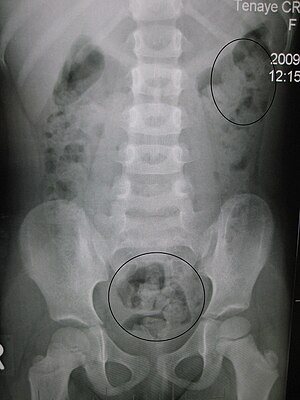 Constipation ( constipation ) is a disorder of intestinal motility and defecation , it is divided into several types according to reason of occurence . It can be defined as the difficulty of emptying solid stools and the impossibility of spontaneous defecation. This is partially a subjective symptom. It can be a separate problem (habitual, addictive constipation) or a symptom accompanying another disease (organic, secondary constipation).

Some of the following apply:

A harmless episode accompanying, for example, a change of residence while traveling, the need to defecate in an unusual environment, etc.

Sudden constipation can be a sign of intestinal obstruction ( mechanical ileus). Other symptoms include colic and gas withdrawal. It is usually accompanied by a bloated abdomen with a high tympanic sound on percussion above the dilated intestinal loop (Wahl's symptom).

It is one of the forms of irritable bowel syndrome . Constipation is usually accompanied by spastic pain before or after defecation. Insufficient emptying is common.

It occurs in young women. The cause of the defecation reflex attenuation is unknown. Constipation develops slowly and does not respond to therapy.

Most family members suffer from constipation, usually since childhood.

It occurs on the basis of rectal prolapse, intussusception or rectocele, or pelvic floor dyssynergia (often in women after severe childbirth).

Regular daily routine and diet, sufficient fluid intake, enough fiber in the diet (whole grains, fruits, vegetables). Plenty of exercise, belly massage and no laxatives. Training of defecation reflex with the use of physiological gastrocolic reflex (after waking up a glass of water, usual morning tasks, breakfast, with an interval of 20–30 minutes attempted defecation).