Biophysics of the auditory organ

Function of the 3 Parts of the Ear[✎ edit | edit source]

3. The fluid-filled inner ear transduces sound vibrations into neural signals that are sent to the brain for processing.

The cochlea is the major sensory organ of hearing within the inner ear. Hair cells within the cochlea perform the transduction of sound waves.

Sensorineural hearing loss occurs when the hair cells or the nerves are affected. In this case, the sound will be heard loudest by the good ear because even conduction through the skull cannot activate damaged cells. Sensorineural hearing can be treated with a cochlear implant.

What is Audiometry?[✎ edit | edit source]

Audiometry is a branch of Audiology and the science of measuring hearing acuity for variations in sound intensity and pitch and for tonal purity, involving thresholds and differing frequencies.

By performing audiometric tests which determine a subject's hearing levels with the help of an audiometer, but may also measure ability to discriminate between different sound intensities, recognize pitch, or distinguish speech from background noise. Results of audiometric tests are used to diagnose hearing loss or diseases of the ear, and often make use of an audiogram. 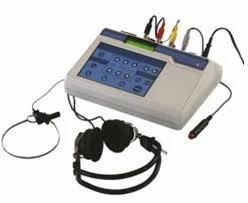 How does a Pure Audiometry Test work?[✎ edit | edit source]

A pure tone audiometry test measures the softest, or least audible, sound that a person can hear. During the test, you will wear earphones and hear a range of sounds directed to one ear at a time. The loudness of sound is measured in decibels (dB). A whisper is about 20 dB, loud music ranges 80-120 dB, and a jet engine is about 180 dB. The tone of sound is measured in frequencies (Hz). Low bass tones range 50-60 Hz, high-pitched tones range 10,000 Hz or higher. Normal hearing range is 250-8,000 Hz at 25 dB or lower.

Pure tone audiometry charts show the hearing level of different tone frequencies in both ears. The red circles represent the right ear and the blue crosses represent the left ear. Across the top, there is a measure of frequency (pitch) from the lower pitched sounds on the left going to higher pitched sounds on the right. Each red circle and blue cross represents the individual frequencies of sound that have been presented. These sounds are measured in Hertz. Down the side of the audiogram, there is a measure of loudness. At the top of the graph are the very quiet sounds, going down to moderate, and then very loud sounds. The points (red circles and blue crosses) marked on the graph represent the quietest sound which can be just heard. This loudness is measured in a scale called decibels (dB). Any points that are heard at 20dB or quieter are considered to be within the normal range.

The large majority of hearing problems are caused by environmental trauma. To achieve good results with hearing aids and implants, it is crucial that cells survive. Researchers currently know more about the biological and molecular mechanisms involved in cell death in the inner ear and can therefore target protection treatments at sensory cells or cochlear neurons or increase their resistance to damage.