COULD BE BETTER. HOW ABOUT BLOOD DYNAMICS? JUST GOOGLE 'BLOOD FLUID MECHANICS' 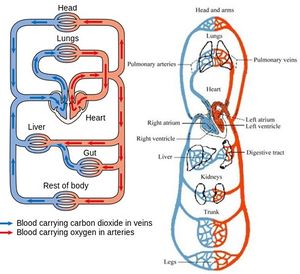 Diagrams which showing the cardiovascular system of the body.

Blood circulation or circulatory system, also called cardiovascular system, is one of three main systems in human body which consist of organs and tissues, including the heart, blood, blood vessels, lymph, lymphatic vessels and glands. This system circulates blood and lymph through the body, delivers nutrients and other essential materials to cells, removes waste products and is important in thermal-pressure regulation of body and efficient regulation of gases and nutrients.[1]

Blood Circulation and oxygen transport through the heart

Structural organisation of cardiovascular system and its biomechanics[edit | edit source]

The cardiovascular systems of humans are closed, so the blood never leaves the network of blood vessels. But oxygen and nutrients diffuse across blood vessel layers and enter interstitial fluid, which carries it to the target cells and carbon dioxide and wastes in the opposite direction. The other component of the circulatory system, the lymphatic system, isn‘t closed.

Main article: Biomechanics of the heart 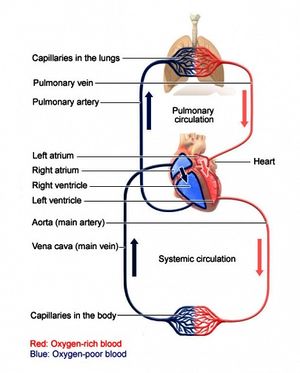 In the human heart there are four chambers. Blood from the right atrium (the upper chamber) is passed into the right ventricle (the lower chamber) and then through the pulmonary artery to lungs. From the lungs and the pulmonary vein the left atrium receives newly oxygenated blood which is passed into the strong left ventricle and then from the aorta to the body. Circulation starts when the heart relaxes between two heartbeats: blood flows from atria into ventricles. Then walls of the ventricles squeeze together and pump blood out into arteries. This phase is called ejection period. Afterwards the heart muscle relaxes, allowing blood to flow in from the veins and fill atria again.

The circulatory system is a two-part system. It's mean that the heart pushes blood out into two major loops (cycles): pulmonary and systemic. In the pulmonary loop blood circulates to and from lungs to release the carbon dioxide and pick up new oxygen.In the systemic loop blood circulates into body’s systems bringing oxygen to all its organs, structures and tissues and collecting carbon dioxide waste. 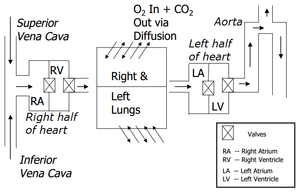