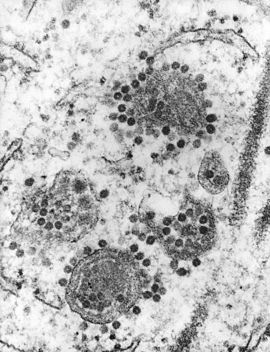 The term arbovirus was derived from the translation of the English term arthropod-borne virus. The arboviruses include viruses of various families that are transmitted by arthropods. The term has an ecological meaning because the patterns of spread and circulation of infection in nature are similar for most arboviruses. Arboviruses are among the most important infectious diseases. They occur on all continents except Antarctica. The arthropods that spread and transmit these viruses to humans, as well as other mammals and other animal species, include haematophagous arthropods such as mosquitoes, hookworms, ticks, mites, etc. Understanding the mechanism of invasion and virulence, as well as tracking the history of these viruses, is key to some control of the spread, especially to develop effective prevention, vaccination and treatment.

Arboviruses are a group of many viruses belonging to different families that share a similar mode of disease spread. There are 7 families of arthropod-borne viruses:

Some human arboviruses are asymptomatic, or the course of the disease resembles influenza, whereas some cause severe haemorrhagic fevers, encephalitis and death. Of the families listed above, only 3 families cause encephalitis in humans, the Bunyaviridae, Togaviridae and Flaviviridae.

Arboviruses are widespread worldwide, with about 500 arboviruses registered today, and about 134 arboviruses have been linked to human disease. In the Czech Republic, only 8 representatives of arboviruses can be found. They are the biggest health problem in third world countries, however, the gradual development of tourism and trade is leading to the introduction of tropical infections even in temperate zones where they did not occur before. Urbanisation, population growth and agricultural development have also increased the risk of contact with arthropod-borne viruses or their vectors. Overcrowding, poor living and sanitation conditions, including lack of drinking water, provide an ideal environment for mosquito breeding. We must not forget climate change, with longer periods of warmth and milder winters than in the past, and this, of course, also contributes to a higher incidence of arboviruses. In tropical climates, the risk of arboviruses is almost year-round, whereas in temperate climates, the risk of arboviruses is from spring to autumn, and the viruses survive the winter, for example, if the mosquito is the vector, in mosquito eggs

The life cycle of arthropod-borne viruses takes place in natural foci. Arbovirus lives without dependence on humans, but if humans are present in an outbreak, they can be infected. In addition to the dynamics of the vector and the host, the climate, the site of occurrence and the host immune system are important for the arbovirus cycle. During their life cycle, most arboviruses cycle between arthropods, which serve as vectors, and enzootic vertebrates, which act as reservoirs. This is biological transmission, during which the infectious agent actively multiplies in the host, which is different from mechanical transmission. There are also cases where the virus is capable of transovarial and transstadial transmission within the carrier population, as well as the ability for sexual transmission between transovarially infected males and uninfected females. Typical vertebrates that serve as reservoirs for arthropod-borne viruses are birds, rodents and non-human primates. However, there are exceptions where it is the human or domesticated animal that becomes the so-called accidental host. Accidental hosts, as opposed to natural hosts, have outbreaks of disease. Humans and domesticated animals are a blind link in the arboviral life cycle because there is insufficient viremia to infect the vector. However, there are so-called urban cycles where humans act as hosts and sufficient viremia occurs to infect the vector. This occurs with Dengue, yellow fever and Chikungunya viruses. Domesticated animals (e.g. horses or pigs) serving as hosts with sufficient viremia to infect the vector are described in the cases of Venezuelan equine encephalitis virus and Japanese encephalitis virus.

Most flaviviruses belong to arboviruses and some are very well studied in association with arboviral encephalitis. They are among the most biologically complex and medically important families of animal viruses. They are spherical enveloped +ssRNA viruses and their size is about 40-50 nm. They are labile and sensitive to ether. It is possible to distinguish them serologically. They include Japanese encephalitis virus, Dengue viruses, yellow fever virus and tick-borne encephalitis viruses (2 subtypes - eastern type and western type).

It is the largest virus family with more than 350 species included in five genera (Orthobunyavirus, Nairovirus, Phlebovirus, Tospovirus and Hantavirus). All but the genus Hantavirus belong to the arboviruses. These are human and animal pathogens, the exception being the genus Tospovirus. This genus is a plant pathogen. They are widespread worldwide, infecting a wide range of invertebrates and vertebrates. They use haematophagous arthropods (mosquitoes, ticks) as vectors. The course of the disease can range from mild asymptomatic infection to pulmonary disease, hemorrhagic fever and severe encephalitis. There is as yet no effective treatment or vaccination for humans.

This genus of viruses is transmitted to plants, animals, and rarely humans. Very widespread in nature. It is mainly an animal pathogen. In cattle and farm animals it is the causative agent of a number of important diseases such as bluetongue (BTV), African horse sickness (AHSV), epizootic haemorrhagic disease (EHDV). Human diseases caused by orbiviruses include tick-borne Colorado fever. Tick-borne Colorado fever has a similar course to influenza. The disease is caused by uncoated viruses around 70 nm in size. Their genome consists of 10 dsRNA segments.

Occurrence on the American continent, it is mainly an agent causing disease in animals. In humans, most cases are occupational infections, infecting endemic areas. The course resembles influenza. They are cylindrical in shape, resembling a projectile. They contain an unsegmented linear -RNA strand.

The endemic areas are mainly Africa and Asia. The vector is the tick and the reservoir of the infectious agent is cattle and camels.

The genome formed by dsDNA. So far, only one representative of the genus is known. It causes African swine fever. The genus name is derived from the English name African Swine Fever-Like Viruses. It is a 200 nm large DNA virus.

Due to climate change, but also due to the development of agriculture, industry, tourism, etc., arboviruses are being introduced to places where they were not present before. Some cause mild discomfort to the sufferer, while others result in serious illnesses that sometimes end in death. There is as yet no effective treatment or vaccination for all diseases caused by arthropod-borne viruses. Prevention in terms of the use of repellents and other means to prevent being bitten or stung by arboviruses should not be underestimated. Another prevention is to prevent the multiplication of the vector.