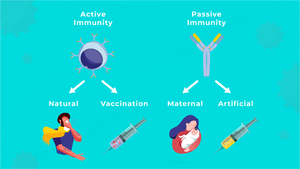 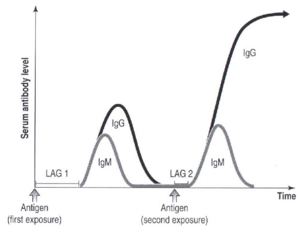 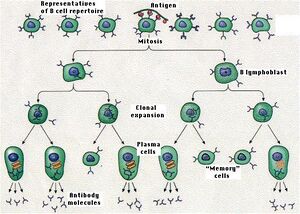 It has been known for many millennia that people only very rarely get sick twice with the same infectious disease. For example, in the plague epidemics of the Middle Ages, those caring for the infected did not fall ill. The first attempts at vaccination were made in 1796 by Edward Jenner (an English physician), who noticed that suckling cows exposed to cowpox virus were never infected with variola virus (smallpox). Hence the name vaccination from the Latin word vacca (cow).

The goal of active immunization is to induce specific immunity against a particular antigen or organism. Active immunity can be divided into:

The effectiveness of vaccination can be observed by comparing morbidity and mortality from infectious diseases before and after the introduction of vaccination. The greatest success of vaccination has been the eradication of variola (smallpox). The principle of vaccination is the artificial injection of an antigen into the body to produce its own specific antibodies.

Vaccines must meet the following criteria

Vaccination is meaningful if it is nationwide or target group vaccination. The number of doses of the core vaccination should be reasonable (maximum 4-5 doses). Adherence to the timing schedule and, of course, adequate health status of the vaccinated person are also important. The success of the vaccination itself is determined not only by the effective vaccine, but above all by the good will to have your child vaccinated.

Vaccines are divided into

To ensure the safety and efficacy of vaccination, spacing of vaccines is essential:

They may be local, general or unusual.

An unusual reaction should be reported to the Health Institute and the Institute for Drug Control in Prague and a batch of the vaccine used should be provided for testing.

Temporary contraindications: acute febrile illness, suspected infection, early convalescence stage (vaccination can be given no earlier than 14 days after the infectious disease has resolved), active tuberculosis.

We individually assess vaccination in people treated with immunosuppressive drugs, including corticosteroids, and in people with active neurological diseases.

Unjustified contraindications are manifestations of atopy, metabolic disorders, including diabetes, stable neurological disease (except for vaccination for pertussis).

Vaccination in the Czech Republic is governed by Decree 355/2017 Coll.

There are several types of vaccination