Types and products of bacterial metabolism

In a healthy adult organism, these events are in balance. The general energy carriers between catabolism and anabolism are macroergic compounds, the most important is ATP (adenosine-5´-triphosphate), other chemical energy transporters include 1,3-bisphosphoglycerate, creatine phosphate, phosphoenolpyruvate and others.

All microorganisms can be divided into:

They obtain energy from light, reducing equivalents and carbon from organic compounds. Some species may use CO2, they are mixotrophic. As an example I will mention: Rhodobacter, Rhodopseudomonas, Rhodospirillum, Rhodomicrobium, Rhodocyclus, Heliobacterium.

They obtain energy and reducing equivalents by oxidizing inorganic compounds and carbon from CO2. This group includes, for example:sulfur (Beggiatoa), nitrifying (nitrosomonas, nitrobacter, which have an irreplaceable role in the N2 cycle) , iron bacteria (Acidithiobacillus ferrooxidans and Leptospirillum ferrooxidans).

They obtain energy and reducing equivalents by oxidizing inorganic compounds and carbon from organic compounds. Examples: some bacteria of the genus Thiobacillus, Beggiatoa, Nitrobacter.

They extract energy, carbon and reducing equivalents from organic compounds. These bacteria are medically most important. This probably includes all bacteria in medical microbiology textbooks. Chemoorganotrophic bacteria are further classified according to their ability aerobic respiration, anaerobic respiration or fermentation. 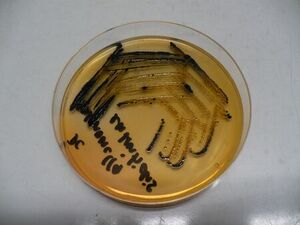 preview Right cultivation of Salmonella enterica enteritidis on deoxycholate-citrate agar Fermentation is a process that releases energy from sugars , organic acids, purines or pyrimidines, does not require oxygen, does not use an electron-transport system, produces a small amount of ATP, oxidizes reducing equivalents (necessary for glycolysis) and releases gases (CO2).It is used in industry and in biochemical identification of bacteria. Simplified fermentation model: glucose is converted to pyruvate,he is converted to lactate (some Streptococcus spp., Lactobacillus spp.) or on ethanol and CO2 (yeast) or propionate (Propionibacterium spp). There are usually more end products - ethanol, lactate, succinate, acetate, CO2 and H2 (Salmonella spp., Escherichia spp.).

Set of events - glycolysis, Krebs cycle, respiratory chain , (electron transport system) – leading to electron transport to oxygen, it arises proton gradient . Protons tend to pass through the pump, ATP synthase ,which synthesizes ATP until the gradient resets. Aerobic respiration takes place in prokaryotes on cytoplasmic membranen in eukaryotes in the cytosol mitochondria and on the inner mitochondrial membrane (one of the proofs of the theory ofendosymbiosis). 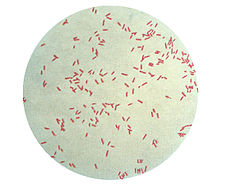 preview 150px Pseudomonas aeruginosa - Gram's stainn It uses elektron-transport system, at the end of which the final electron acceptor is not oxygen but another substance. This other substance may be nitrate NO3- (reduced to nitrite NO2- or to gaseous N2 - Paracoccus denitrificans and pseudomonads) or sulphate SO42- (reduced to hydrogen sulphide HS-, Desulfovibrio spp.), CO2 (reduced to methane CH4, Methanothrix thermophila) or fumarate (reduced to succinate, Bacteroides spp.). Other acceptors can be ions selenium, iron, arsenic etc. This type of respiration generates less ATP than aerobic respiration because only part of the Krebs cycle is used.

For completeness, it should be mentioned that bacteria have lipases, which it cleaves fats on fatty acids and glycerol. Glycerol enters as glyceraldehyde-3-phosphate into glycolysis and is subject to fatty acids beta-oxidation , in which it splits acetylcoenzym A,which enters the Krebs cycle. Glycerol and fatty acids can enter the fat anabolism. Proteases and peptidases serve to catabolize protein. They arise from them aminoacids, which undergo mainly deamination or transamination, whose carbon skeletons enter the Krebs cycle or anabolic reactions.

It should be noted that there is no interaction between catabolism and anabolism neither in the bacterial cell nor between the bacteria nor between the bacteria and the host. Bacteria live in a kind of dynamic equilibrium, compete for substrates (increase the expression of an enzyme that utilizes a given substrate), or cooperate. This balance, for example in the intestine, can be disturbed antibiotic or a food ingredient that favors certain bacteria.