Tobacco is an agricultural product processed from the leaves of plants in the genus Nicotiana. The addictive nature of tobacco comes from the characteristic alkaloid nicotine within. There is a degree of variation in extent of harmful effects of nicotine, tarry compounds, and carbon monoxide in tobacco smoke to different individuals and their tolerance. Because of the addictive properties of nicotine, smoking tobacco entails dependence and tolerance. Dependence can be psychosocial or physical (among 60% of smokers). There is however a large sector of smokers who are taking a step toward cessation of their smoking habit. Giving up the smoking habit can be so tough for many individuals that assistance is sought from health care professionals and sometimes by use of medications. Nicotine dependence level is vital for gaining estimation of withdrawal symptoms (their severity and treatment) and (especially) for Nicotine Replacement Therapy, NRT indication. A successful treatment can be arbitrarily defined as the complete cessation of tobacco products consumption for 6 to 12 months.

Tobacco dependence is defined as, “Cluster of behavioral, cognitive and physiological phenomenathat develop after repeated tobacco use and that typically include a strong desire to use tobacco, difficulties in controlling its use, persistence in tobacco use despite harmful consequences, a higher priority given to tobacco use than other activities and obligations, increased tolerance and sometimes a physical withdrawal state” (Hughes JR).

High and still increasing number of victim comprise of the teenage group of population, most commonly initiated under peer pressure.

Majority of the physical dependence cases are nicotine dependant. This has a higher frequency of relapse. Physical dependence can be measured roughly by the knowledge of smoking frequency in a day (10-15 cigarettes a day usually explains nicotine dependent) and the time interval between waking up in the morning & smoking the first cigarette (within an hour explains nicotine dependent). Fagerstrom Test of Nicotine Dependence entails a brief questionnaire to aid in quantifying the dependence type in more detail. This questionnaire comprises of point value system, which is usually assessed health assistant.

Although stopping smoking can cause minor short-term side effects such as reversible weight gain, smoking cessation services and activities are cost-effective because of the positive health benefits. Early “failure” is a normal part of trying to stop. It has been estimated; only less than 10% of smokers are able to quit smoking on any given attempt without medicines or other help.

Strongly urge tobacco user to quit. However, the interaction with the tobacco user should be friendly, supportive, friendly and nonconfrontational. Important to convey the benefits of quitting. Present interesting and motivational facts thatit only takes 20 minutes for your body to start undergoing beneficial changes. Within 20 minutes the blood pressure drops to normal. Within 8 hours Carbon-monoxide level in blood drops to normal. Within 24 hours to 48 hours chance of heart attack declines to half.

Determine willingness to make a quit attempt. The stages may be,

Arrange a follow-up, especially during the first weeks of the commencement of therapy. Be aware and prepared for potential relapse (mean critical time is 3 months)

NRT is not a treatment for smoking. It is a method of substituting the nicotine in tobacco products by an approved nicotine delivery product so that the tobacco user does not have uncomfortable withdrawal symptoms upon stopping the tobacco product. Overtime, the dose of NRT is gradually reduced to make the process of cessation comfortable for the tobacco user. The release of nicotine into the blood, and thus its transport to brain is slower for NRT as compared to tobacco nicotine. As compared to blood levels of nicotine following tobacco smoke inhalation, NRT blood levels increase relatively slowly. Hence providing motivation and building patience for the user are essential.

Examples of NRTs include: 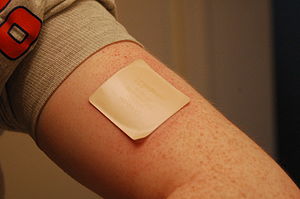 This therapy technique exploits the use of medications which act on other similar nicotine sensitive neurotransmitters, thus proving effective regulation. This helps in overcoming the impulse to use nicotine and to minimize withdrawal effects. While with nicotine replacement therapy, the tobacco user immediately quits tobacco use upon starting NRT, in the case of non NRT medication, the user sets a stop date slightly further into the future after initiation of the medicine.