Therapeutic use of gamma-rays

COMMENT: you did not focus enough on 'therapeutic use'. Too much on general gamma info and also imaging.

1. Definition: Gamma radiation is a highly energetic electromagnetic radiation. It appears often with alpha- and beta-radiation. Gamma rays are the same type of ionizing radiation like x-rays but differ in their origin.

γ-radiation originates from transitions in the atomic nucleus (γ-decay): Nucleons (protons, neutrons) go from an energetically higher state to a lower energy state. The energy is emitted in form of γ quanta (also known as photons with an energy level > 10-100 keV). It has its smallest wavelength between 10-14m 10-11 and a higher frequency between 1019 and 1022Hz. Due to that, it is the most energetic wave in the electromagnetic spectrum.

Compared to alpha and beta radiation, gamma radiation hast he highest penetration power, even a thick sheet of a dense material such as lead will not block them completely. It has a nearly endless range in air and travels with the speed of light (3x108m/s).

The picture shows you that Gamma-ray photons have the highest energy in the Electromagnetic radiation spectrum and their waves have the shortest wavelength.

2. Use and importance in clinical medicine

• Gamma rays are mostly used in the radiotherapy/ radiooncology to treat cancer. They can also be used to spot tumours. • Gamma rays can kill living cells and damage malignant tumor. The Gamma radiation intensity decreases exponentially with the depth of penetration. They damage the cancerous cells' DNA, causing them to die or reproduce more slowly.

• It is mostly used when the primary tumor has been removed surgically but the oncologist believes that some clusters of tumor cells may remain in the vicinity of the surgical site, when the tumor is detected in early stage of its growth and when low-dose radiotherapy is more harmful to tumor cells than to surrounding tissues, such as in certain skin cancers

The image represents the technique called Radiotherapy to treat Gamma Rays. They do this by targeting the cancer cells with a beam of radiation then rotating the beam like it is shown in the picture 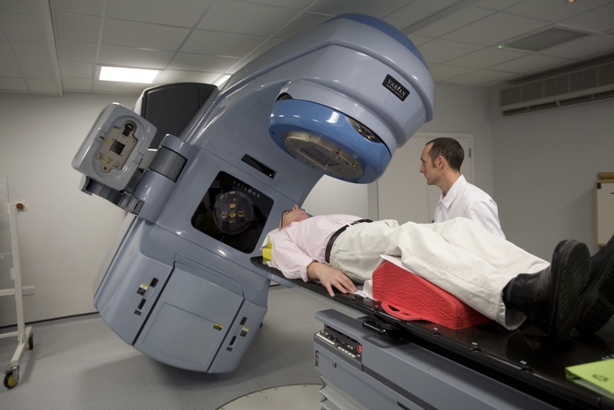 • Some advantages are: The radiation is pointed at a particular part of the body and in the most cases it does not destroy the surrounding parts. Normal cells in the radiotherapy area may also be damaged but they can usually repair themselves.

• Some disadvantages are: Gamma rays can interact with the cells in your body, they could damage the body and being the reason for cell death of normal cells. Another result of the use of gamma rays could be an abnormal mitosis, implies a change of DNA, which leads to genetic damage and to DNA mutations in other cells that survive the radiation. This may lead to the development of a second cancer.

• Another use of gamma rays is to do functional imaging. A small amount of radioactivity is administered usually through intra-venous injection. The radioactive chemical is chosen so that e.g. it is preferentially uptaken by cancer cells. Then, a special device named a gamma-camera detects the gamma photons stemming from the body, creates images and allows the physician to locate the cancer cells. The radiographer puts a detector around the body to detect any gamma rays that pass out of the patient's body Radioisotopes with short half-lives are chosen to make sure that the tracer does not stay radioactive in the body for long periods

• How gamma rays work: Gamma rays can create charged particles and free radicals. In cells, the water can be ionized to form free radicals (H+) and (OH-) . The free radicals made inside a cell's nucleus can cause damage to the cell's components and breaks in the DNA structure. The cell cannot longer reproduce and the result is cell death.

• Ethical issues: In addition to the many positive characteristics of gamma rays in the medical treatments and possibilities of diagnostic, there are some things that have to be observed in dealing with gamma radiation. Whoever comes into contact with gamma radiation, must be very careful. Not only the patient is exposed to the gamma radiation, which can even promote the formation of cancer cells, but also the medical employees themselves. For this reason, a sufficient self-protection for radiation is very important and that you get trained adequate on dealing with medical equipment using gamma radiation. As a doctor you should also ask yourself the question if it is really necessary of exposing a patient to gamma radiation or not. Otherwise you could probably harm your patient.

4. Conclusion The primary goal of treatment planning is to precisely calculate the radiation dose to the tumor in order to improve the outcome and reduce toxicity. The future of imaging in radiation therapy treatment planning is promising, and other advances will contribute to better target definition. Higher resolution imaging will be developed for specializing the tumor in an improved way, like higher definition PET-CT scanners and high magnetic field MR would have the ability to improve the visualization of tumors even to the level of microscopic disease extension.