The role of Helicobacter pylori in the pathogenesis of gastric cancer

Various factors play a role in the pathogenesis of the disease virulence of this bacterium. The natural course of the infection may vary depending on genetic predispositions bacteria and hosts and depending on the environment. 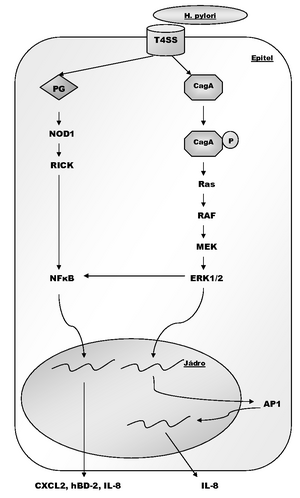 With its virulence factors, H. pylori stimulates an inflammatory response on the stomach wall.

One of the ways the bacteria acts is through the secretory system genes cag-PAI. The created channel (T4SS - Type 4 secretion system) allows to transfer the CagA protein across the membrane gastric epithelial cell membrane. Following its phosphorylation, a cascade of MAP-kinases (mitogen-activating protein kinase) is activated, leading to the activation of NFκB (nuclear factor κB) and AP1 (activator protein 1), leading to the production of pro-inflammatory factors. Likewise, the proteoglycan (PG) of the gram-negative bacterium wall can pass through T4SS, which via NOD1 (nuclotide-binding oligomerization domain-1) and RICK (receptor-interacting serine-threonine kinase, RIP2) also activates NFκB and thus the production of cytokines and other inflammatory mediators.

However, H. pylori can also act with its lipopolysaccharide through TLR4 (Toll-like receptor 4), which also stimulates an inflammatory response via NFκB.

The role of the immune system[edit | edit source]

Mechanisms of the host's immune response to damage, such as H. pylori, also play an important role in the pathogenesis of gastric cancer. Experimental infection of Helicobacter T and B lymphocytes did not lead to changes in the gastric mucosa. Helicobacter spp. in mice without B cells but capable of a normal T-cell response, severe mucosal atrophy and metaplasia occurred. Further experiments have shown that Th1 cells in particular are involved in the pathogenesis of atrophic gastritis.

Experiments in mice have also suggested that hematopoietic cells from bone marrow, stem cells, endothelial or epithelial progenitors or myofibroblasts may be recruited during chronic inflammation. These cells settle in the inflammatory tissue and are most likely involved in the progression of the disease.

The presence of inflammatory mediators represents a non-physiological environment for stem cells, in which metaplasia to dysplasia can therefore occur. Further increased IL-1β production; causes reduced gastric acid secretion. Elevated pH is conducive to bacterial growth. Few species of bacteria can survive in the stomach with normal secretion of stomach acids. In contrast, at pH> 4, a wide range of species is able to grow.

Although it would appear that the administration of proton pump inhibitors (PPIs) in reflux oesophagitis may dramatically increase the risk of atrophic gastritis by increasing pH, previous studies on this topic are contradictory and generally show no link.

We must not forget the increased production of free radicals due to inflammation. The formation of ROS (reactive oxygen species, eg in the natural neutrophilic immune response) and RNS (reactive nitrogen species, eg due to stimulation of iNOS - inducible NO synthase - via NF-κB) leads to further damage to tissue, cell structures and also to numerous DNA mutations.

Bacterial, genetic, immune and molecular factors are involved in the etiology and pathogenesis of gastric cancer. The key stimulus is probably the presence of H. pylori in the stomach. Eradication of H. pylori can not only stop pathological changes in the stomach wall, but can even reverse atrophy and restore normal gastric wall architecture. The disease progresses from inflammation through atrophic gastritis, intestinal metaplasia and dysplasia to adenocarcinoma. It depends on the genetic make-up of the bacterium and the host whether the disease progresses or whether H. pylori infection is asymptomatic. Template: Complete the source