During oxidative phosphorylation a high energy electron is passed along an electron transport chain the inner mitochondrial membrane in eukaryotes. This linked set of proteins carry out redox reactions which release energy. The energy released by electrons flowing through this transport chain, pumps hydrogen out of the matrix space across the inner mitochondrial membrane. This produces an electrical potential across the membrane and a store of potential energy as a pH gradient. The gradient created by this allows hydrogen back across the membrane, through an enzyme called ATP synthase. This process is called chemiosmosis and it occurs during cellular respiration. As this happens, the enzymatic activity of ATP synthase synthesizes adenosine triphosphate, ATP, from adenosine diphosphate, ADP in a phosphorylation reaction which is driven by the proton flow. There are five main protein complexes involved in eukaryotes. 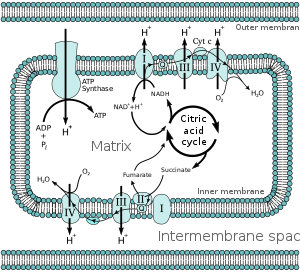 Although cellular respiration is dependant on the function of the proton gradient the oxidative phosphorylation also generates a significant proportion of the formation of the harmful ROS, reactive oxygen species, in cells such as superoxide and hydrogen peroxide. Resulting in free radicals that damage cells and contribute to disease. Mitochondria therefore also has mechanisms that protect the cells from the reactive oxygen. As an example the increase of ethanol concentration in a cell changes the conditions so that the mitochondria produce more reactive oxygen. Ethanol may also damage the mitochondrial DNA leading to the deterioration of the protective mechanisms. Hence mitochondria have a central role in the emergence of liver disease due to alcoholism.